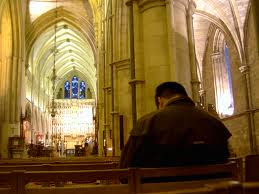 That’s the assessment of a new poll, which finds a surprising number of people in “unchurched” parts of America still describe themselves as “Christian”:

While it’s no surprise that the highest proportion of self-identified Christians reside in the South, a new survey reveals that even in the most unchurched U.S. cities, nearly three out of four people say they’re Christian.

According to Barna Group, the most unchurched cities – where around four out of ten adults have not been to a religious worship service in the last six months – are San Francisco; Portland, Maine; Portland, Ore.; Boston; Sacramento; and Seattle. Many of these cities also have the highest percentage of atheists or agnostics.

Yet in each of these cities, 68 to 76 percent identify as a Christian.

David Kinnaman, who directed the research project, concluded that Christianity in America is “remarkably resilient and mainstream.”

“Nearly three out of four people call themselves Christians, even among the least ‘Christianized’ cities. Furthermore, a majority of U.S. residents, regardless of location, engage in a church at some level in a typical six-month period,” he said in the report Monday.

“The real differences spiritually between various regions are not so much what they call themselves; the faith gaps are more likely to be issues of belief, practice, politics and spiritual emphasis – how people think about, prioritize and express their faith.”

read next post
Homophobia in the Church? Really?
archives most recent
More from Beliefnet and our partners
previous posts