Not only that, but it’s named for a beloved pope. 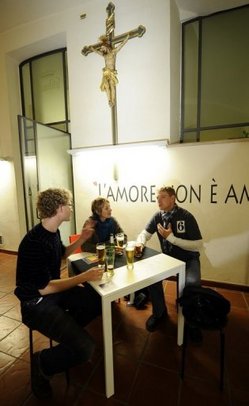 The beer is cheap, the waiters are talkative and the music is 1960s Motown — but the new pub that opened its doors this week in a historic crypt in central Rome is not really like any other.

Start with the landlord being a Catholic priest, the religious sayings on the walls and the large crucifix hanging in one of its vaulted rooms.

Then there’s the name of the new drinking establishment: “Giovanni Paolo II”, or “John Paul II”.

“Vodka is not allowed here,” said barman Marco Mincaglia, as he served out beers and snacks to a visiting group of young German pilgrims.

Massimo Camussi, the doorman, dressed in a black T-shirt reading “JP2,” said: “It’s about drinking to meet people and talk about the Catholic Church and listen to Catholic music. We love John Paul II.”

The “John Paul II” is not just a novelty drinking venue — it’s part of a Catholic initiative called “Jesus in the Centre” aimed to reach out to the clusters of kids who flock to central Rome at night.

“The idea is to offer the young people of Rome… an opportunity to express themselves, to listen, to be listened to, to drink something but in a healthy way, in a nice way,” said Maurizio Mirilli, a priest and the landlord.

“The important thing is that anyone who comes here should know they can’t get drunk. There are rules. Because you can have fun, you can drink in a healthy way. There’s no need to go crazy to have fun,” he said.

The sign on the bar behind him reads: “Give me a drink” — a quote from Jesus Christ in the Bible — another from pope John Paul II reads “Be not afraid” and from Saint Therese of the Child Jesus: “Everything is grace.”

read next post
The boss is undercover, but his faith is out in the open
archives most recent
More from Beliefnet and our partners
previous posts