A fabled Catholic cultural institution may be vanishing in one part of the country: 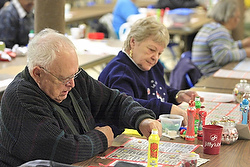 It seems that the “bingo bubble” in many areas of the Albany Diocese has burst.

The game of chance long subsidized many parishes and schools, bringing in tens of thousands of dollars a year in some instances. But today, group after group reports that the fundraiser stopped delivering, forcing them to cross it off their lists of moneymakers.

Some say commercial bingo halls and Saratoga’s Gaming and Raceway, nicknamed Racino, gave them too much competition. Others say the state bans on smoking in schools and public places scared players away.

For years, Albany diocesan officials, like church leaders in many U.S. dioceses, have discouraged church groups from hosting bingo, instead encouraging “good stewardship and generous free-will support” for financing programs. They say the game is a form of gambling, which the Catholic Church considers immoral if taken too far.

Bingo’s presence in other denominations varies. Some, such as the Baptists, eschew all gambling. Others may use bingo to raise funds for operations or charity, even while keeping more overt gambling on the “verboten” list.

Across the United States, religious leaders routinely band together to protest plans for new casinos, state lotteries or off-track betting.

Still, a handful of Catholic groups in the Albany Diocese defend the game of bingo as an important social outlet for senior citizens, as well as a viable fundraising tool.

“The church doesn’t play bingo the way they do other places,” explained Maria Swieton, president of the Rosary Society at St. Michael’s Parish in Cohoes.

Her group deploys teams of five to seven volunteers to the church hall Tuesday nights to make and sell food and moderate games.

Admission cards cost $2, while they can cost $15 to $40 at commercial halls or casinos. The St. Michael’s group charges a quarter for additional cards, a dollar for larger ones.

Their 80 weekly players average 80 years old, often coming as part of a nursing home trip with their aides. They can win up to $30 or $40 in a regular game, up to $400 in the last game of the night.

“I think it’s wonderful, keeping older people’s brains going,” Swieton told The Evangelist, newspaper of the Albany Diocese. “This is the best joy for these people.”

read next post
Why do bad things happen to good people?
archives most recent
More from Beliefnet and our partners
previous posts