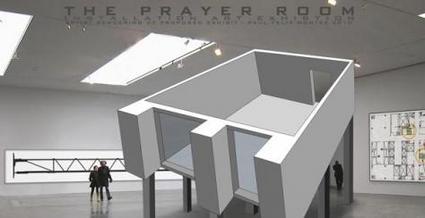 The above rendering will evidently recreate the areas Muslims used for prayer in the World Trade Center.

The Prayer Room’ exhibit, inspired by the Muslims who worked in the World Trade Center towers, is being planned for the 10th anniversary of 9/11.

The exhibit will be based upon two Muslim prayer spaces – one being the stairwell on the 163rd floor and the other on the 17th floor South Tower room – which Montez plans to recreate to at least an 80% scale.

read next post
Conan's first guest? Pick the pope!
archives most recent
More from Beliefnet and our partners
previous posts