All the Catholic news that’s fit to print 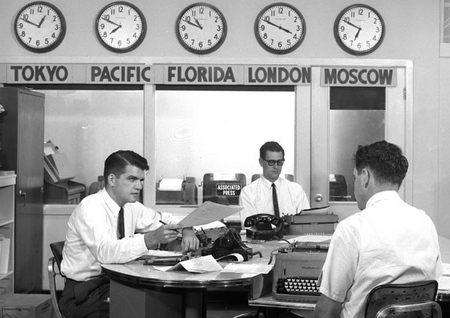 And now, a little news about Catholic news: this comes to us from the Vatican, via Zenit.

What future does the Catholic press have at the height of a digital revolution that is bankrupting many newspapers? According to the president of the Pontifical Council for Social Communications, the future will depend on the capacity of Catholic journalism to be faithful to its mission.

Archbishop Claudio Celli added that the communications crises and scandals that the Church has gone through in recent years emphasize even more the need to have means of communication with a Catholic vocation.

The archbishop made these assertions when he opened a global conference of the Catholic press being held in Rome.

Taking part in the meeting, which Benedict XVI will close on Thursday, are some 230 directors or representatives of Catholic newspapers and digital publications, bishops and priests, experts of ecclesial commissions and institutions responsible for communication, as well as university professors.

In his opening address the archbishop presented the Catholic press “as a reality that is close to people, capable of accompanying one’s life, of perceiving the concerns, desires and plans of the people who are its readers — not only of those who belong to the Catholic community.”

In the field of communication, said Archbishop Celli, the Church is also the “expert of humanity,” although “right now a person might smile at this affirmation, especially if reference is made to the well-known and painful vicissitudes of the sexual scandals to which the press has given so much echo.”

The prelate acknowledged “that although these revelations have been a shock for the Pope and for the Church, as Benedict XVI himself said to journalists accompanying him on the plane to Scotland, this grave and shameful sin does not in any way call into question the vocation and mission of the Church to be at the service of man with love.”

There’s more, so check it out.