The pope, and the greatest story never told 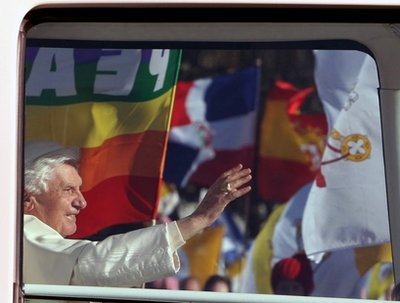 One of the biggest surprises of Pope Benedict’s historic trip to the United Kingdom may be how few people realize that it was, in fact, historic.

Sunday night, I was chatting by phone with my father-in-law in Maryland. I told him I’d been busy with the papal coverage all weekend.

“Really?,” I replied. “He was the first pope to visit the Church of England’s Westminster Abbey. He stood there with the Archbishop of Canterbury, side by side, as they both pronounced the final blessing and made the sign of the cross together.”

“He did that?” My father-in-law sounded genuinely surprised.

“He went to the hall where Thomas More was sentenced to death and delivered a speech about religion to the civil leaders of Great Britain.”

“And he took part in his first beatification: Cardinal John Henry Newman, an Anglican priest who converted to Catholicism.”

I could almost hear him scratching his bald head. “How come nobody said anything about that?”

Now, my father-in-law is a pretty smart guy, and what you might consider an observant Catholic. He attends mass every morning. He keeps up on current events. Now retired from the FDA, he regularly checks in with the Washington Post, USA TODAY, MSNBC and CNN. But he was baffled that this stuff I was telling him wasn’t on the nightly news.

“All we saw down here,” he explained, “was that he met with sex abuse victims.”

I started to wonder what sort of coverage the trip had received. After I hung up the phone, I searched through several newspaper websites. I clicked on the New York Times, Los Angeles Times, Boston Globe. Nothing, nothing, nothing. None of them mentioned on their home page the pope’s just-completed trip.

When I got to work on Monday, I searched CNN Newsource, which provides newsfeeds to my show, “Currents,” as well as to countless other news programs around the country. I found a grand total of one item, running about a minute long, slugged “Anti-Pope Demonstrations.”

Based on my conversation with my father-in-law, you could be forgiven for thinking that the pope made the trip just to meet with victims of sex abuse — and that a lot of Britons were ticked off about it.

Now, I know: it’s tempting to argue that it was a conspiracy of media bias. But I think there’s something sadder and less sinister at work: it’s the economy, stupid. The religion beat, in most places, just doesn’t exist anymore. (Ironic, considering that a recent report says it’s something that people crave.) But it’s one of the first things to be cut in a budget crunch. In television news, the days when CNN had a Delia Gallagher or ABC had a Peggy Wehmeyer are long gone. It’s worse at newspapers, many of which are on life support, gasping for air. Truly historic moments, potentially earth-shifting events, like the pope’s trip to the UK, are going under-reported, or un-reported, or mis-reported. They get coverage, but not necessarily from a regular reporter, who understands the nuances of the beat. As a result, they happen in a void, without any real context beyond the hot-button issues of sex or violence or protest. And isn’t it sad: that seems to be all that we hear about religion — any religion — in the media these days.

Call me old school, but there’s something wrong here.

If my father-in-law, a fairly well-informed guy in the pews, didn’t know what he didn’t know, I have to wonder: how many others in the pews are also being left in the dark?

read next post
"Continuity has always been the papacy's purpose..."
archives most recent
More from Beliefnet and our partners
previous posts