A Chicago city church moves to the suburbs — brick by brick

Last winter, I posted this story about a Buffalo, New York church moving, brick by brick, to Georgia.

Now, a similar move is about to happen in Chicago:

Church congregations have been known to migrate from the city to the suburbs. But rarely has a church edifice made the journey. 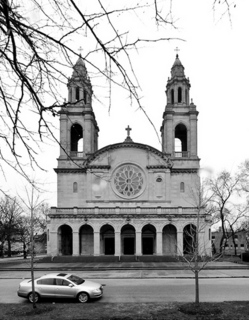 The former St. John of God Roman Catholic Church, 1234 W. 52nd St., is being disassembled piece by piece. The carved limestone and the two 135-foot bell towers are being numbered and shipped north almost to the Wisconsin border, to Old Mill Creek.

There, on 40 acres owned by the Chicago Archdiocese, the Renaissance Revival church will be rebuilt. Its front and back, the parts richest in architectural detail, will be used in building a new church for St. Raphael the Archangel Roman Catholic Church, which is directing the estimated $10 million move.

St. Raphael will move from nearby Antioch, where it has held mass in a renovated barn since it opened in 2007 as the archdiocese’s first new parish since 1999.

The new church “has been a long time in coming,” said Richard Gambla, St. Raphael’s business manager. “This will be a wonderful place of worship for us.”

St. Raphael wanted to recycle as much material as possible for its new church, and it hit on the idea of moving St. John of God. The onetime Polish church opened in the New City community in 1920 and closed in 1992. Its architect was Henry Schlacks, who designed several other churches in Chicago and the suburbs and started the architecture department at the University of Notre Dame.

“His style was not extravagant. But in his simplicity was beauty,” Gambla said.

Some might see the move as a sign of community abandonment, but Gambla said the church’s neighbors and city officials are glad it’s being reused. He said he has heard grateful messages from longtime parishioners of St. John of God.

“The building was in such disrepair,” Gambla said. “It was only a matter of a very short time that it would have collapsed.”