The “miracle” of Mark Herzlich

A college football star’s extraordinary recovery from cancer may, in fact, have had some divine help. 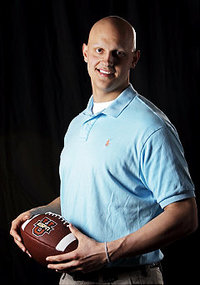 Herzlich, an all-American linebacker, had frequented the sandwich shop in his four years, but his relationship with Acampora grew richer in trying times. To offer hope, Acampora, a religious man, explained that the water was from Medjugorje, a small village in Bosnia-Herzegovina where locals claim witness to Virgin Mary apparitions.

“It has done wonders for others,” he told Herzlich.

Acampora welcomed the 6-foot-4, 238-pound Herzlich at the store counter with a smile after the player received the package. Herzlich hugged him.

“Do you know how much your life means to people?” Acampora asked.

Fifteen months since learning that a tumor in his left femur was cancerous, Herzlich, 22, has returned to the team with his strength restored and leg intact. In recovery, he sprinkled water on his skin, rubbed resin on his hands before lifting weights and manipulated muscles now affixed to the 12-inch titanium rod that was inserted into his leg for support. Rehabilitation has been measured in leaps.

At first, he could barely hop; now he performs left-legged box jumps, skips rope and sprints on a stationary bike. The cancer is in remission. Over Fourth of July weekend, he stood on one leg as he water-skied at Lake Placid.

“Some of what he does on the field seems supernatural,” says Jason Loscalzo, B.C.’s strength and conditioning coach.

Read on for more.

read next post
"My brother, the priest"
archives most recent
More from Beliefnet and our partners
previous posts