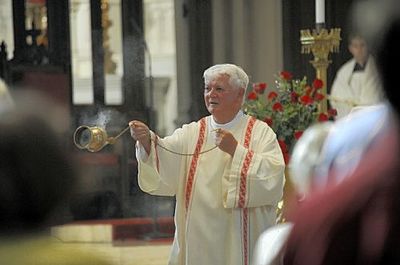 Before he heads to Birmingham for the beatification of John Henry Newman next month, the deacon miraculously healed by Newman’s intercession is speaking out:

Deacon Jack Sullivan got up from his seat next to Bishop David Zubik at the front of St. Paul Cathedral and walked to the pulpit to deliver the homily during Thursday evening’s Mass.

His message to the more than 300 worshippers in attendance was simple: They had just witnessed a miracle.

For more than a decade, doctors had been telling Deacon Sullivan, 71, of Pembroke, Mass., that his spinal degeneration would require surgery to prevent paralysis. Even after having surgery, they told him, he would be unable to walk for at least four months.

Deacon Sullivan said he turned to prayer, asking Cardinal John Henry Newman, who died in 1890, to relieve his pain and help him to finish his studies to become a deacon in the Catholic Church. The pain, he said, went away, and he was able to walk through the corridors of the hospital that same day.

His doctors, who had diagnosed his condition as being among the worst they’d ever seen, said there was no medical explanation for Deacon Sullivan’s recovery. And the Catholic Church has agreed, saying that it was the miracle necessary for the beatification of Cardinal Newman in a ceremony attended by Pope Benedict XVI next month in England.

Deacon Sullivan’s story served as the welcome to those attending the three-day National Newman Conference in Pittsburgh, during which more than 25 speakers from all over the country and Europe will share their thoughts on Cardinal Newman’s life, writings and teachings. The National Institute for Newman Studies in Oakland and the nearby Oratory congregation in the Ryan Catholic Newman Center is hosting the conference…

…”I’m just an ordinary guy — nobody special,” Deacon Sullivan said after the service. “And if I can be healed, anybody can. What we’re saying is hang in there, have faith, there are better days ahead. So many out there are suffering. So many people are living in sorrow. And Newman is telling them, through me, perhaps, that there is hope if we can just persevere, trusting in God’s providence even though we’re suffering.”

I had the opportunity to chat with Deacon Jack a couple weeks ago, to set up an interview with him in advance of the beatification.  He’s a lovely guy, and he’s all that a deacon should be: unassuming, engaging, down-to-earth, and blessed with a healthy dose of Irish good humor. I hope to meet him the next time he passes through New York — and, if only for a fleeting moment, I’ll be able to say that I met a miracle.

read next post
"Religious cleansing," as Catholic teachers are fired
archives most recent
More from Beliefnet and our partners
previous posts