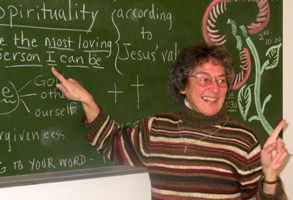 The tragic story of the Benedictine nun killed in a Virginia car crash has grabbed a lot of headlines — but so should this story, about how her community is coping:

There is an amazing backdrop this week for the Benedictine nuns in Virginia who are reeling from a deadly drunk-driving crash: silent retreat.

The community of 33 women had their annual retreat scheduled when the crash happened Sunday morning, killing one sister and seriously injuring two others. There was discussion about canceling the event or at least the silent aspect, but the women voted by a show of hands in the kitchen Sunday evening to go ahead. This has created unusual conditions for mourning and resulted in scenes like those that unfolded yesterday: women silently folding napkins in preparation for their sister’s wake, women listening to a fortuitously-named lecture on “Forgiveness and Reconciliation,” special prayers being spoken at Mass for hospital staff and for “the safety of all those traveling.”

The decision to go ahead with their silent retreat was an unusual one, but the spiritual community at the Saint Benedict Monastery is unusual as well.

Like some monastic religious orders, the Catholic Benedictine Sisters’ priority is on their relationships with one another–as opposed to on service, for example–but for them it’s to the point that they take a unique vow, along with chastity and poverty, of “stability”–to remain based here, in Bristow. And this week, as three seats are glaringly empty in the tiny wood-beamed chapel, the women are facing the loss in intense, private prayer.

“I looked out at the women and here they are, with all red eyes and all cried out,” Sister Christine Vladimiroff, the key presenter for the week, said of the mood when she arrived Sunday. “I thought: What does this have to do with anything?”

But the community, which runs a counseling center, a grade school and a literacy program here on the wooded, 120-acre property, wanted to forge ahead with the retreat, even as pairs of two took turns driving to Fairfax to sit a vigil by the injured nuns’ bedsides.

In fact being together, instead of spread out doing their normal weekly work, and being in prayer, created a cushion, and a structure for their initial days of shock and mourning.

“Being all together gives us focus,” said Sister Andrea Verchuck, 81..

The women voted on an altered silence; anyone who wants to talk can do so in the kitchen or living room, but the halls of the dorm-like building and the grounds are to remain silent. Usually there is no TV, but some women wanted it on to hear the news of their community and the driver. And their voices were heard at Mass yesterday, when it came time for voluntary prayer calls. Most of the more than 20 women at the service spoke. The first prayer was for the two injured nuns, and for the driver, Carlos Martinelly Montano, “his little children and his parents, we pray.”

“Lord hear our prayer,” came the group response. Other prayers were requested for the intensive care staff at Inova Fairfax, volunteers helping prepare for Friday’s funeral, and “for peace in our world and peace in our hearts.”