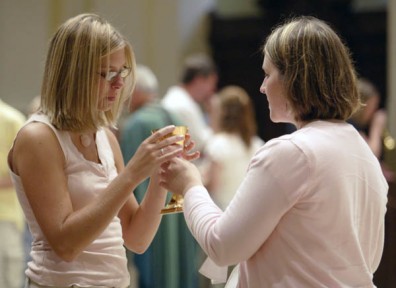 A British observer has some sharp words about EMHCs at Catholic liturgies:

What’s the point of all these assistants? The Catholic Church does allow for what it calls an extraordinary minister of Holy Communion, in cases when the priest is not available. But there is absolutely no need to have five extra ministers, giving Holy Communion under both kinds, as I saw this morning in an ordinary parish church, two thirds full, with a perfectly capable parish priest.

I can’t help thinking all these ministers are there just to give the more assertive parishioners something to do – so that they feel as though they’re joining in. I should think the priest is often bullied into allowing it, and daren’t refuse. As for ordinary Catholics, most of them probably find the extra helpers irritating, but are too polite to say.

Parish priests should resist this expansion in ministers of Communion. After all, it’s not as if the Church officially sanctions the practice – as I say, it’s lifted from the Protestant churches, which mostly have a completely different understanding of the Eucharist.

He goes on, but you get the idea.

At my parish in Queens, the pastor insists on something I’ve never seen anywhere else: he wants all the ordinary ministers (the priests and the deacon) present at every Sunday mass, giving out communion. (I give my pastor props for this: he can barely walk, but struggles out into the sanctuary four times every weekend to distribute the Body of Christ.)  EMHCs are then used almost exclusively to distribute the Precious Blood, and occasionally to fill in if the clergy are away. We use three or four at every Sunday mass.  Now, this is a big church, seating close to a thousand, so you really do need the extra hands on a Sunday.

But on vacation recently, I witnessed another phenomenon, at a daily mass with 30 or 40 people in attendance. There was the celebrant — plus three or four EMHCs to help distribute both the host and the Precious Blood. That struck me as overkill.  But I can understand the priest’s predicament: you have all these people lining up, eager to help, and no one really wants to discourage lay participation.

But, as with most things, a little moderation and common sense might be more helpful than all those extra hands…