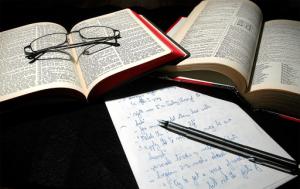 How does a preacher prepare for the Sunday homily? A local paper in Oregon took up that question this weekend and asked preachers of various denominations — and got an interesting array of answers:

Quaker pastor Stan Thornburg of North Valley Friends Church writes out his sermon in its entirety, but he rarely reads it. Instead, he said, he’ll produce an outline from the sermon and use this as a prompt. And he won’t shy away from discarding his prepared work entirely if at some point he recognizes that the congregation is reacting particularly well to a given passage.

“I don’t like to write out word for word,” said Pastor John Amstutz of Newberg Foursquare Church. “In my style if I write out everything I become too scripted and too formal.” He said his greatest fear still is that he would lose his notes or fail to be prepared.

Like Lamm, Amstutz prefers to teach through a book verse by verse. “Right now I’m teaching through the Book of Luke,” a project Amstutz started last year. Unlike his colleague, though, he only uses his outline as “a compass with a few markers along the way.”

By going verse by verse Lamm says a pastor and his flock can’t avoid passages they may be uncomfortable with. “It kind of forces your hand to deal with it,” he said.

“People would probably say that my sermons are pretty simple and pretty practical,” said Father Don Gutmann of St. Peter Catholic Church, who has less leeway in choosing topics. Every Catholic Church in the world follows a lectionary, as do some of the mainline Protestant churches.

Catholic services include four readings and Gutmann peruses them “trying to figure out what’s going to be most relevant to the people.” He keeps his sermons under 10 minutes. “It certainly is my preference to keep Mass within one hour so people don’t get too squirmy.” He varies from where he delivers the sermon to “keep things fresh.” He strives for a conversational tone and uses an outline whose detail depend on the topic.

Speaking for myself: as most here know, I work off a written text. I start out preparing Sunday night, reading over the next Sunday’s scriptures. I make that my lectio for the week. I revisit it every morning for a few minutes, let it sink in, and keep my eyes and ears open for news or stories that might illuminate the text. I like to take a look at one or two commentaries (Barclay is a favorite) for context and history.  I try to bang out a first draft Thursday night. Then sleep on it. Take a few more cracks at it Friday. Sleep on it. I fiddle around with it some more on Saturday.

I print it out using 16 pt. type, which is easy to read and, for most homilies, takes up four pages.  I try to make it a habit to practice the text out loud three times. I start out with just a straight read-through, to listen for problems and see how it strikes the ear. (I may further edit it after that). Then I’ll try it two more times — always standing, since that’s the way it will be delivered. I will feel out the pauses and phrasings and consider if there are any gestures that might help. By the time I’ve finished the third read, I have a decent idea of the homily’s architecture and layout. When I climb into the pulpit, I then only have to glance it at periodically, to get my bearings and remember key phrases or details.   (One of the valuable things about working from a text is that you can control the length of the homily — along with the structure and direction of it.  It gives the work a clear beginning, middle and end.)  The running time is fairly consistent: 7-8 minutes.

Sometimes, of course, all this flies out the window and I’ll make some unexpected revisions early Sunday morning, or I’ll get a late start, or I’ll never get to practice.   Inevitably, in those cases, the Holy Spirit comes through.

read next post
Happy Independence Day, from Big Brother
archives most recent
More from Beliefnet and our partners
previous posts