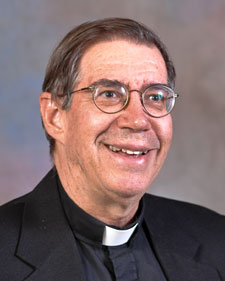 When I was in formation, I spent many weeks lugging around a massive volume “Reading the Old Testament” by Fr. Lawrence Boadt. (My shoulder still hasn’t recovered.) A couple years later, I actually got to meet Fr. Boadt at the offices of Paulist Press in New Jersey, and I told him he loomed so large in my studies, “I feel like I’m meeting Elvis.”
He seemed amused.

Well, word came from the Paulists today that Fr. Boadt has died, after a long illness.
Elvis has left the building.

Deacon Bill Ditewig, who wrote several books for Paulist on the diaconate, broke the news to me in an e-mail and noted: “Without Larry’s personal decision in 2003 affirming the priority for publishing books ‘by, for and about’ deacons, we wouldn’t have had any of the books on the shelf. ” “The shelf” Bill refers to is the unique and invaluable Paulist “Deacon’s Library,” which includes now-standard texts that have become required reading in formation programs around the country (including, of course, several tomes by Deacon Ditewig.)

One of Boadt’s editors, my friend (and editor of the Deacon Library) Kevin diCamillo dropped me an e-mail and said:

I just got back from a week long inaugural Yale Publishing Course and one of the questions asked incessantly was “Are Publishers Necessary”?

For the diaconate in the past decade they were and remain so. It was Fr. Boadt– who took NONE of the credit– who imagined, and built the Paulist Press Deacon Library, now up to 14 titles, with two more in production and four more under contract. Sales are in the tens of thousands.

What Father Boadt did for the diaconate in the English-speaking world is attested to by the high-sales number of the Paulist Press deacon books and, frankly, a better-informed and better-educated diaconate.

A world without Fr. Boadt? Might as well throw out Ferraris, The Met, Stradivarias violins, and the female sex as well.

The release from the Paulists has a biography:

Born the son of attorneys Loren A. and Eleanor (Power) Boadt in 1942, Father Boadt grew up in the St. Paul the Apostle parish located in the Westwood neighborhood of Los Angeles. Paulist archivist Father John Lynch was newly ordained when he first met Father Boadt, then a fifth-grader in the parish school. Father Lynch recalls seeing the makings of a priest in the young altar server and Cub Scout.

“He was dependable and enjoyed serving the church,” Father Lynch said. He noted that Father Boadt kept his close association with St. Paul’s as a student at Loyola High School in Los Angeles; he graduated from Loyola in 1960. Father Lynch was not surprised to hear the young man entered the Paulist novitiate on Sept. 6, 1962. He was ordained a Paulist priest on February 22, 1969.

Father Boadt earned bachelor’s and master’s degrees from St. Paul’s College Washington, D.C., master’s and licentiate in sacred theology degrees from the Catholic University of America in Washington, D.C., and licentiate in sacred Scripture and doctoral degree in biblical studies and Near Eastern languages from the Pontifical Biblical Institute in Rome.

“That was extraordinary,” observed Father Lynch. “Not many people can accomplish that, as the mastery of ancient languages is incredibly difficult. He was the type of priest who could do anything.”

Father Boadt’s first priestly assignment was as associate pastor at St. Andrew’s parish in Clemson, S.C., from February to October of 1969. Father Boadt then headed to Rome for advanced Scripture studies where he served on the parish staff at Santa Susanna, the Paulist parish in the city.

Father Boadt returned to the United States to teach at Fordham University in New York City from 1974-76 while becoming an editor at the Paulist Press in 1975. He taught at St. John’s University in Queens from 1975-76 while still working at Paulist Press.

He returned to Washington, D.C., as associate professor of Sacred Scripture at the Washington Theological Union, where he taught from 1976-1997.

“There was a program for working students where they took a 3-hour class once a week, and he could still keep the students engaged through that long class after they had worked all day,” said Father Lynch, who taught at The Catholic University in Washington, D.C. for many years. “He was a superb teacher.”

Father Boadt continued as editor at the Paulist Press, becoming vice president in 1997. He had served as publisher and president of Paulist Press from 1998 until his illness in 2010.

According to Father Lynch, Father Boadt continued the Paulist work of evangelization through the printed word while expanding the Press’ extraordinary contribution to ecumenism and interreligious dialogue, especially Christian-Jewish relations.

“Building on the work of his predecessor Father Kevin Lynch, there is no publisher in North America who has done more to advance Catholic-Jewish relations than Larry Boadt,” said Father Michael B. McGarry, president of the Paulist Fathers.

Father Boadt authored several books, including “Reading the Old Testament: An Introduction,” “Jeremiah 26-52,” “Habakkuk, Zephaniah, Nahum,” and “Jeremiah 1-25.” He also edited many titles, such as “Why I Am A Priest: 30 Success Stories” and “The Life of St. Paul.”

“His legacy will be his writings,” said Father Lynch, noting “Reading the Old Testament” is one of the most widely used texts in Scripture courses. “This is a big loss for the Paulists.”

And, of course, for deacons, too. The Paulist release has details about the funeral.

Eternal rest grant unto him, O Lord, and let perpetual light shine upon him…

read next post
Mad Men: one day and counting
archives most recent
More from Beliefnet and our partners
previous posts