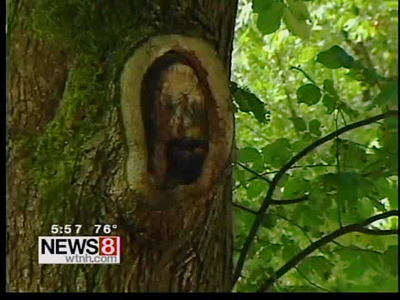 Maybe he’s in the tree because his eye is on the sparrow?

A Wallingford tree is attracting a steady stream of people to come and take a look at the mysterious image in its bark.

The elm tree in front of 394 North Main Street has become a bit of a tourist attraction. Suddenly people are stopping to get a glimpse of what some people believe is the image of Jesus Christ.

“I walk here all the time. Never thought of looking up, but if I looked up, I think I would’ve stopped and taken a look at it,” commented Carolyn Massoni of Wallingford.

Massoni and her daughter Marylou McNamara wanted to see for themselves and they’re convinced there is something special there.

“It’s definitely there,” said McNamara, also of Wallingford. “You can definitely see it.”

“I think there could be something to it, just the way it’s formed,” Massoni added.

The man who owns the house says he didn’t notice the face until just a few days ago when someone pointed it out to him. Now, he says it’s all he sees.

“Oh, it’s kind of weird,” David Doolittle said. “I walk through the hallway of the house. I can see Him looking in at me. It’s like every move you make, you know.”

There’s more at the link, along with video and more pictures. 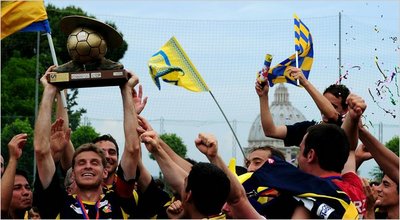