“I overcame these trials because God is calling me” 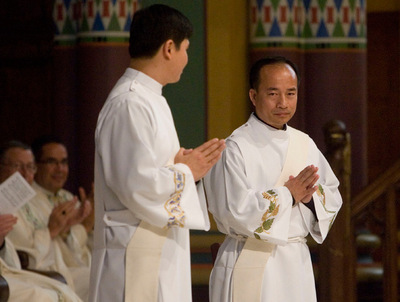 You never can be sure what God has up His sleeve.

Consider, for example, the remarkable stories of the two men who were recently ordained priests for Salt Lake City.

The saga of Fr. Tai Nguyen really is something:

Nguyen, 44, was reared in a devout Vietnamese family. His grandparents were killed by the Viet Cong because they were Catholic and his own parents fled North Vietnam in 1964 for South Vietnam, where persecution continued after the Communists took over.

Churches and seminaries were confiscated. “We had no freedom to practice our faith,” Nguyen recalls.

Nguyen knew as a teenager that he wanted to be a priest, but he was refused advanced education. “Even though I had a dream, it could not happen,” he says. “It was impossible.”

He failed six times to flee Vietnam, although his older brother and his twin brother did succeed on one of those attempts, making it to the United States.

After one escape attempt, Nguyen was jailed for five months and tortured, he says. “It was scary.”

On his seventh attempt, Nguyen succeeded, although he and dozens of other refugees went eight days without food or water after their boat’s motor failed. They were rescued by a fishing boat.

He spent seven years in a refugee camp in the Philippines and then more than nine years under the protection of the Catholic bishops of that country, even though his citizenship status was not settled.

At last able to pursue his studies, Nguyen was two years away from finishing his seminary education when the U.S. government reopened his case along with other refugees stranded in the Philippines.

He finally came to the United States, where he rejoined his twin brother in Atlanta in December 2005.

A few months later, Nguyen got a letter from a Vietnamese priest in the Salt Lake Valley who had heard of Nguyen’s seminary training. That priest sent him a plane ticket, and soon Utah, which he never had heard of, was his new home.

He entered Mount Angel Seminary in Oregon, where many Utah seminarians study, in 2006. He spent the first year focusing on English before moving on to advanced philosophical and theological studies.

Ordained a transitional deacon a year ago, he had friends from the Philippines and his two brothers at his ordination to the priesthood last month in Salt Lake City.

His mother died 11 years ago in Vietnam, and his father and other siblings were not allowed to travel to the United States for his ordination.

Through it all, especially the many years of limbo in the Philippines, Nguyen says, he kept assuring himself that God had a plan for him.

Now, he is watching it unfold.

“You have to do the will of God first,” Nguyen says, “and everything else he provides.”

He wept for joy during the ordination. “I overcame all these trials and difficulties because God is calling me. The most important thing for me is the people. I can bring the word of God to them.”

Read more at the link. God bless him and all the men joining the priesthood this season. What a gift they are to us all. 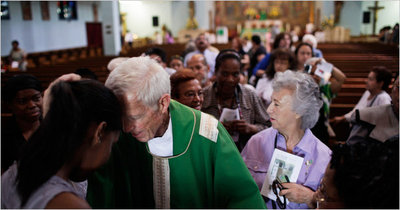