This week a documentary on ESPN asked that question, and offered a powerful answer.

June 17, 1994 was one of the most dramatic days in modern history. Arnold Palmer played his last U.S. Open. In Chicago, the World Cup began, kicked off by Oprah Winfrey and Bill Clinton. In New York, down in the Canyon of Heroes, they staged a big parade for the New York Rangers, who had just won the Stanley Cup. The NBA playoffs were getting underway.

But the biggest news was in Los Angeles where, at 11 am, an arrest warrant was issued for O.J. Simpson. 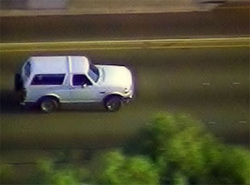 What followed gripped the world. You probably remember where you were now. I was at my office at CBS News. Like about 90 million other Americans, I was sitting in front of the TV, watching that white Bronco move along the California freeways. The documentary on ESPN brought all that back.

You saw the hordes of helicopters hovering over Los Angeles. The hundreds of people who stopped their cars and got out and waved and cheered as the Bronco rolled by. The hundreds more who jammed into Brentwood to stand outside Simpson’s house, laughing and cheering and posing for the TV cameras staked out on the road.

All this, for a man accused of a brutal and bloody murder, who at that moment was believed to be on the brink of committing suicide.

Among other things, the ESPN documentary was a chilling reminder of what has gone wrong with the media over the last 15 or 20 years.

It also showed, vividly, what happens if you follow the crowd – people looking for something sensational.

Very often, the first instinct of a crowd is to get it wrong.

The crowds, after all, are the ones who called out for Christ’s crucifixion. In today’s gospel, as that moment draws near, Jesus wonders what they think of him. “Who do the crowds say that I am?,” Jesus asks. And every answer is not only incredible, but incredibly wrong. John the Baptist. Elijah. An ancient prophet risen from the dead.

“The Christ of God.”

In a great irony, Peter…the man who will later deny knowing Jesus…knows exactly who he is.

But what about us?

Jesus asks us the same question.

A few years ago, ABC News tried to answer that question, and did some investigation into the “historical Jesus.” After picking apart what we do and do not know about Christ’s life, death and resurrection, Peter Jennings concluded: something happened. It defies logic why scores of people in first century Judea would give their lives – suffer and bleed and die – for someone who was only a legend. Something transformed a ragtag group of observant Jews – fishermen and tax collectors and prostitutes and otherwise unremarkable sinners – into Christians, and martyrs.

Something made them do what Jesus said they would have to do: “Take up your cross daily and follow me.”

Of course, we know that “something” was the resurrection: seeing and experiencing the risen Christ. Knowing his redeeming power. Grasping at last what it truly means “to love one another as I loved you.” That personal encounter changed everything.

After that, they couldn’t help but gaze at him, in wonder and in awe, and agree with Peter: “You are the Christ of God.”

Can we say as much? Our experiences aren’t all that different.

The apostles had witnessed miracles. Every Sunday, we witness the miracle of the Eucharist, and relive and remember Christ’s great sacrifice.

They had heard for themselves God’s word. We hear it here, week after week, from this pulpit.

Jesus still walks with us. He still speaks to us – if we listen. His hand still reaches out to us — in friendship, and consolation, and healing.

The apostles had shared meals with him, broken bread with him. We will do that, too, just moments from now. More than merely a meal, we will share in Christ himself.

The beautiful fact is this: the Jesus who had prayed and preached with them is with us, here and now. He remains a part of us.

As they did 2,000 years ago, “the crowds” will get things wrong. They usually do. A world that chases celebrities and gossip will not see the Son of God for what he truly is.

But the most powerful and penetrating reality of Jesus Christ isn’t out there, in an anonymous crowd. It’s closer than we think. It is here in the Eucharist, something we can touch and taste. It is in God’s grace. In His mercy. And it is in His unending love, which gave us His only son.

What others think and believe is irrelevant compared to all that.

How can we help but answer, with certainty, with gratitude, and with wonder: “You are the Christ of God.”

How long until we see this on the altar?
archives most recent
More from Beliefnet and our partners
previous posts