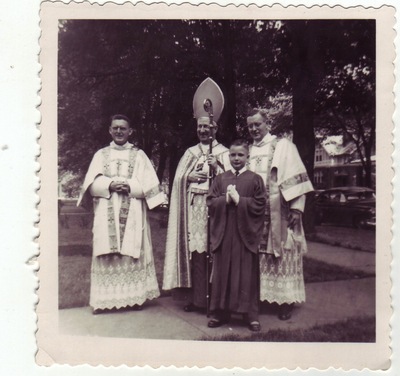 Well, that was what his mother had hoped and prayed for. It didn’t quite work out that way.  The celebrated film critic — now suffering from a ravenous form of cancer that has taken away much of his jaw — remembers his Catholic upbringing, the loss of his faith, and the vocation that wasn’t.  It’s all in a poignant entry over at his blog.

And he has this interesting take on the Church of his youth:

In my childhood the Church arched high above everything. I was awed by its ceremonies. Years later I agreed completely with Pauline Kael when she said that the three greatest American directors of the 1970s–Scorsese, Altman and Coppola–had derived much of their artistic richness from having grown up in the pre-Vatican Two era of Latin, incense, mortal sins, indulgences, dire sufferings in hell, Gregorian chant, and so on. Protestants and even Jews were victims, I suppose, of sensory deprivation.

The parish priest was the greatest man in the town. Our priest was Fr. J. W. McGinn, who was a good and kind man and not given to issuing fiery declarations from the pulpit. Of course in Catholic grade school I took the classes for altar boys. We learned by heart all the Latin of the Mass, and I believe I could serve Mass to this day. There was something satisfying about the sound of Latin.

“I will go to the altar of God. The God who gives joy to my youth.” There was a “thunk” to the syllables, measured and confident, said aloud the way they looked. We learned in those classes when you stood. When you knelt. When you sat during the reading of scripture and the sermon. When you rang the bell, when you brought the water and wine. How to carefully hold the paten under the chins of communicants so a fragment of Holy Eucharist would not go astray. Later, there were dress rehearsals on the St. Pat’s altar.

For years I served early Mass one morning a week, riding my bike to church and then onward to St. Mary’s for the start of the school day. On First Fridays, the Altar and Rosary Society supplied coffee, hot chocolate and sweet rolls in the basement of the rectory. When you served at a wedding, the best man was expected to tip you fifty cents. When you served at a funeral you kept a very straight face. During Lent there were the Stations of the Cross, the priest and servers moving around the church to pause in front of artworks depicting Christ’s progress toward Calvary. Walking from one station to the next, we intoned the verses of a dirge.

At the cross, her station keeping,
Stood the mournful mother weeping,
Close to Jesus to the last.

This was the Stabat Mater in English, we learned. Of course it had been written in Latin. You could go anywhere in the world and the Mass would sound the same, we were told, and the priests could all speak with one another in Latin. The dissolution of that practice at Vatican Two was the end of something that had survived for nearly two millennia. I loved the idea of Latin. I loved the hymns, especially Tantum Ergo, the solemn song at the Consecration of the Eucharist, which had been written by Thomas Aquinas.

Read the rest. It’s both beautiful and heartbreaking.