Worth a thousand words 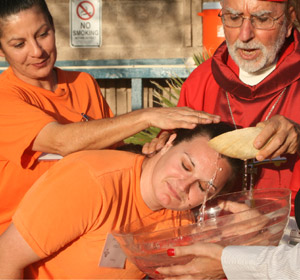 A hazy sun settling slowly behind Tucson’s “A” mountain softly illuminated the 20 women in bright-orange uniforms who were gathered in the razor-fenced yard. Every face was aglow and smiling as they filed back into the prison. They had just taken part in an event unusual — perhaps unprecedented — at the minimum-security Southern Arizona Correctional Release Center: the full initiation of five inmates into the Catholic faith. Correctional officers looked on as Tucson Bishop Gerald F. Kicanas baptized and confirmed the five young women in outdoor ceremonies witnessed by the quintet’s sponsors and friends, while other inmates at the 300-resident facility ate dinner and then relaxed in an adjacent yard. Carmelite Father Ron Oakham, pastor of St. Cyril of Alexandria Parish and a prison chaplain, assisted the bishop, after earlier listening to several confessions in a far corner of the yard. Deacon Oscar Chavez traveled from Yuma to play a guitar and lead the gathering in song. Tears flowed, along with holy water, as Bishop Kicanas baptized three of the inmates and anointed them with chrism, and all five were confirmed. The five are Ashley Ireson, Eve Medina, Tammy Judd, Hermelinda Arzate and Kimberly Antone.

Photo by CNS/Bern Zovistoski, the New Vision
read next post
The anti-me
archives most recent
More from Beliefnet and our partners
previous posts