Who we are: a snapshot of deacons in America 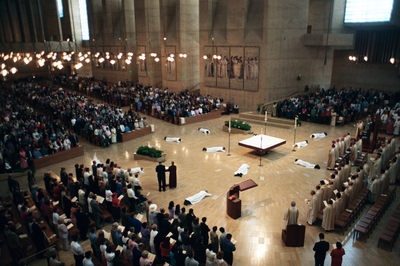 The ink is still damp on this new study out of Georgetown on the permanent diaconate. But here are the major findings:

• Twenty-one arch/dioceses report having more than 200 permanent deacons, with Chicago (646 deacons), Trenton (442 deacons), and Galveston-Houston (383) among the top three. Deacons currently minister in all but one diocese in the United States.

• Eight in ten permanent deacons in responding arch/dioceses are active in ministry.

Ninety-two percent of permanent deacons in active ministry are currently married. Four
percent are widowers, and 2 percent have never been married.

• More than six in ten permanent deacons in active ministry are at least 60 years old.
Almost four in ten deacons are 60 to 69, and about a quarter are 70 or older.

• Eighty-one percent of active deacons are non-Hispanic whites. Fourteen percent are
Hispanic or Latino. Two percent are African American and 2 percent are Asian.

There’s much more. Visit the link for the rest.

read next post
Quote of the day: "The church has a profound need to relearn penance..."
archives most recent
More from Beliefnet and our partners
previous posts