The legendary rock star who made his name in the group Black Sabbath died over the weekend, after a battle with cancer. And it seems he also had a battle with faith.

Deacon Scott Dodge unearthed this interview, from Heavy Metal Magazine, from a few years back: 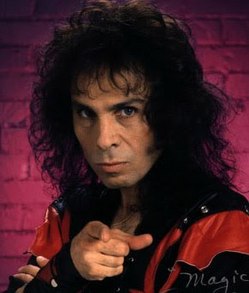 HMM: “How has your Roman Catholic background inspired, affected or driven your lyrics writing.”

Dio: “It’s given me a lot of religious turmoil in some of the songs I’ve done. I never agreed with the message of the Catholic church, and still don’t to this day. There are some things that are fine, and what I think is very important is the moral upbringing of the young people. But I mean, you could send people to the church of silly walks, and they’re gonna get that. I just disagree so much with the way the Catholic church says things like if you’re not a good person you’ll die and go to Hell, there’s a purgatory there . . . if I was talking with a Holy Ghost, it would scare the living Hell out of me. God’s Son was nailed to a piece of wood up in the air . . . instead of really explaining it all, I think, at least from my perspective, they frightened us first, and then we’re supposed to just believe everything, and follow the rules or you’ll burn in hell or something. And I just totally disagree with that. I disagree completely with that idiom. The whole attitude about birth control — I mean we are a country that took about 10,000 generations to reach the population we have now, which is 4 billion, and it’ll only take a little over 1 generation to double it, but yet, you’re supposed to not use birth control — let’s have more children! So, the Catholic church, though I think it’s important that people grow up with moral values, I just always disagreed with their tactics, which I thought were fright tactics, as opposed to sitting down and explaining the situation.”

HMM: “What do you think of Jesus Christ?”

Dio: “I think that He was a prophet. I’ve had a difficult time coming to terms with Jesus Christ as the Son of God. He was a great man for the time… The thing that bothers me about taking that conclusion is that most of the general statements that Christ made, you can look at the dead language of Greek at the time it was used, and the writing styles that shifted around 50 A.D., you can pretty much date parts of the New Testament. Then His whole claim to be the only way wouldn’t make Him a good prophet, because like a lot of Muslims believe that Jesus was a great prophet in the lineage of prophets. But a good prophet is not gonna stand up there and say, “I’m the only way to the Father.” He’s either a liar or He’s a crazy man.”

Check out the link for more — including Deacon Scott’s canny insight that Dio may have something in common with C.S. Lewis.