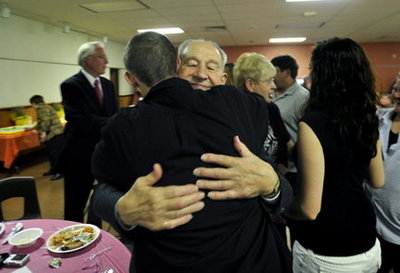 If I’m lucky, and God doesn’t mind, (and I haven’t lost what’s left of my marbles) maybe this one day could be me:

Lou Weitzel piloted a B-24 bomber over Europe during World War II, helped Ford Motor Co. integrate its production in Canada, and now each Sunday he serves as a deacon for St. Rita’s Catholic Church in Clark Lake [Michigan].

At 90, Weitzel is the oldest active deacon serving in the Catholic Church in the United States, an achievement for which he was honored Sunday.

“He is a dedicated leader in whatever area it is,” said Tom Weitzel, his son. “With the family or during his time at Ford Motor Co., he always led by example.”

Weitzel was born May 18, 1920, in Zionsville, Ind., to Urban and Mary Weitzel in a family that held a deep faith in the Catholic Church. Weitzel was the youngest of four boys. Each boy went on to serve in the church.

However, for Weitzel his journey took a somewhat different path.

After two years studying engineering at both the University of Notre Dame and Purdue University, Weitzel yearned to become a pilot in the U.S. Air Force. The war in Europe was just beginning to break out, and he wanted to serve in the air.

However, early on in his training he was informed that he would not be given the chance to be a pilot. He said his youth kept him out of the “pilot fraternity” at the time. That did not stop him. He just went to another air force, specifically the Royal Canadian Air Force.

Weitzel said the Canadian forces were looking for pilots in the United States who were not serving. He said citizenship did not matter, just the commitment.

Until 1943, he flew patrol missions in England for the Royal Air Force. It was then the U.S. Air Force called on him for help and as Weitzel puts it, “he was purchased by the USAF to fly missions over Europe.” He flew 33 combat missions and earned the Distinguished Flying Cross.

After the war, he went on to work for Ford Motor Co. with Production Control. He spent 33 years with Ford and retired in 1980. At that time, he lived in Livonia and spent many hours at St. Aiden’s Church.

After his wife’s death in 1987, Weitzel began thinking more of church service. After he moved full time to his summer home on Lake Somerset in Columbia Township, he wanted to find a role at St. Rita’s. So he went on to train as a deacon and was ordained in 1992 . He has been serving at St. Rita’s since.

Church parishioner Michael Bradford said the only description of Weitzel “is that he is an inspiration to all of us.”

And all of us deacons, too! Ad multos annos! And a happy, happy birthday, too!

UPDATE: Well, it seems the title of “America’s oldest deacon” may not be accurate.  I just got this e-mail from a reader:
I read your wonderful article and wanted to let you know that my Grandpa- Milton Opper is 95 and is an active Deacon in the Diocese of Toledo Ohio and is serving at St. Peter and Paul in Sandusky Ohio.  We would love for Grandpa to be recognized in this way.
There you go!  Is that amazing, or what? Ad multos annos!