Several years ago my wife and I went on vacation to Arlington, Vermont. We stayed at a bed and breakfast, and one afternoon paid a visit to the Norman Rockwell Museum. Rockwell spent part of his life in Arlington, and painted some of his most famous work there. 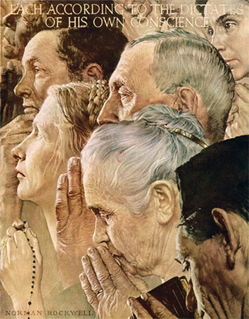 The museum has a fair number of Rockwell’s works on display in the museum. But it turns out that many of the people who volunteer and work there are IN the paintings. They posed for him 50 or 60 years ago — a lot of them when they were young children. It’s a little startling to be met at the door by a 70-year-old woman who appeared as a 10-year-old girl in one of his magazine covers. But there’s something poignant and beautiful about it, too.

Norman Rockwell himself always insisted on using ordinary people as models. Many were his neighbors and friends. He felt that real people captured something you can’t find in professional models. And he summed it up beautifully. “All of the artist’s creativeness” he once said, “cannot equal God’s creativeness.”

If you want to understand just how creative God can be, look no further than this Sunday’s readings. This is Trinity Sunday, when our minds are challenged to comprehend something that is, frankly, incomprehensible: one God in three persons.

But God’s creativeness so far exceeds our own. And His love overwhelms us.

He is a God who loves us so much…He created us, as God the Father.

He is a God who loves us so much…He became one of us, as God the Son.

And He is a God who loves us so much…He remains with us, as God the Holy Spirit — abiding with us and continuing, in astonishing ways, His creation.

The reading from Proverbs sets the stage, as the “wisdom of God,” the Holy Spirit, speaks of the joy of being present at the beginning of the world. “When the Lord established the heavens, I was there…I was beside him as his craftsman…and I found delight in the human race.”

I love the image that conjures up – a joyful, happy craftsman, almost like one of the seven dwarves, whistling while He worked.

But, incredibly, He loves us anyway.

And He is a God who loves us so much, He cannot contain Himself.

“Everything that the Father has is mine,” Jesus declares in John’s gospel, explaining that the Holy Spirit will also share that with his disciples.

God wants to share Himself with us – to give all that He has.

Here is a God so generous…He gave us Himself, in flesh, to suffer with us and die for us.

Here is a God so generous…He continues to give us Himself, through the appearance of bread and wine, here at this altar.

Here is a God so generous, He shares with us gifts: wisdom and understanding…courage and piety…knowledge and counsel and fear of the Lord.

Here is a God who loves us beyond our wildest imaginings – three distinct persons, but with limitless possibilities.

And He wants us to discover that, and celebrate that. He is constantly calling out to us.

But not necessarily with words.

When I was studying to become a deacon, I became good friends with one of my classmates, Jim Hynes. Jim was a big, burly guy, a retired cop, but a gentle giant. He loved Disney World and for a big man, his favorite Disney character was one of the smallest: Jiminy Cricket from Pinocchio.

Well, about 10 months after we were ordained, Jim was rushed to the hospital. They found cancer, and tried to treat it, but he also had heart trouble. They couldn’t save him. He died just shy of his 50th birthday. A couple weeks ago, on the anniversary of our ordination, his widow Kathleen posted on Facebook an essay that he had written for one of our classes.

Jim wrote about visiting Colorado to teach a course on law enforcement. He got there early and decided to take a drive. It was spring, and the snow was melting and the rivers were rising. As he drove along the highway, he was awed by the beauty of what he saw. At one point he drove through a dark tunnel, through the mountains, but then came out the other side to see something wondrous: the most spectacular Rocky Mountain scenery. It gleamed with greatness. Jim encountered, more profoundly than ever, the presence of God. He realized that only the Divine Creator could have done that. And it changed him. I think that may have been the beginning of his vocation. For the rest of his life, he talked about revisiting that corner of Colorado. That place, Jim wrote, was where he truly found God.

Well, the fact is: God wants to be found. And He gives us so many opportunities – so many times when we travel through even the darkest tunnels of our lives and then come out the other side to encounter, unexpectedly, something surprising and beautiful and holy.

It might be in a mountain.  Or it might be in the next cubicle at work.  It might be in watching a toddler learning to walk, or in hearing a kind word from a stranger on the subway platform.

It might be in the broken bread of the Eucharist.

God is present.  If we only look, we will find Him.

Norman Rockwell found something of God in the ordinary people of Arlington, Vermont, and created some beloved and popular works of art. But each of us, in our way, is called to create our own work of art, from the many colors of our own lives. And it begins by discovering the greatest artist of all, The One whose creative genius guides everything.

This Trinity Sunday we are reminded again of the limitless possibilities of God – one God who cannot be contained, but must co-exist as three persons. Let us seek Him out in all His creativity, in all His manifestations – as Father, as Brother, as Counselor and Friend.

He is ready to help us.

Because He is a God who wants to be found.