Friday night, I watched the rehearsal for this weekend’s confirmation. It was a little different from what I remember from my own confirmation almost 40 years ago.

But one thing hasn’t changed – the “confirmation name.”

Young people still choose a confirmation name, a patron saint to model themselves after, and to give them inspiration. (I picked Peter for mine — one of the names that my mother had considered for me when I was born.)  Over and over, they came forward as their sponsors announced the names. Francis. Elizabeth. Veronica. John. I found it unexpectedly moving. And I realized: here, before my eyes, was the communion of saints. Here is what we all aspire to become. Here was something so full of promise – a new chapter being written in the lives of these young Catholics. “Behold,” as we hear in Revelation today, “I make all things new.”

What beauty and hope we hear in those words – especially now, with the joy of Easter still burning in our hearts, still alight here in this Paschal candle.

And the gospel today drives home that hope. This is Christ’s enduring message, delivered in his final hours of earthly life, distilled to just a few sentences.

“I give you a new commandment,” he says. “As I have loved you, so you also should love one another. This is how all will know that you are my disciples, if you have love for one another.”

It is a beautiful message – but daunting. “As I have loved you, so you also should love one another.”

Think of what that means. Here is a love ready to embrace everyone – a love that can open its arms wide enough to be nailed to a cross.

Here is a love that bleeds, and that suffers – yet keeps giving anyway.

Here is a love without strings.

Encountering this gospel once again, we may find ourselves humbled – and even ashamed. Are we doing enough?

Do I obey that new commandment, loving as Jesus did? Do I love so deeply, so fully, so selflessly that others will know that I am one of his disciples? Do I give to those who can give nothing back?

In 1849, four women set out to live the answer to that question – and made history.

They were four Sisters of Charity, who were sent to a small brick house on West 13th Street in Manhattan. There, they established a hospital, with just a handful of beds, but with a fervent and faith-filled mission: to care for the poor, the outcast, the immigrants — the ones nobody else would help. Their new hospital would be named for the man who founded the Daughters of Charity, St. Vincent de Paul.

And so St. Vincent’s was born.

St. Vincent’s became legendary. It is where they took survivors of the Titanic in 1912. When word reached New York that the ship had gone down, the sisters wired the Carpathia, which had rescued the survivors, and said that ambulances would be waiting at the dock – but only to care for the people who were in steerage. They knew the rich would already be taken care of. The hospital was such a landmark, the parents of a newborn girl named her for the hospital – a little girl who became the poet, Edna St. Vincent Millay. 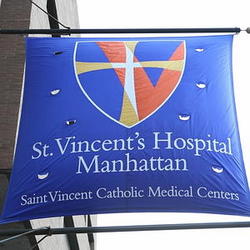 The hospital’s impact was remarkable. It is where they developed one of the first health care centers for people with AIDS. It is where doctors and nurses realized that they needed to help those living in nearby Chinatown, so they set up a special outpatient clinic there, with free shuttle service to the hospital, where they had a small staff fluent in Mandarin and Cantonese.

St. Vincent’s was also unabashedly, unashamedly pro-life. It developed a remarkable Perinatal Hospice Unit for pregnant women who discovered that, for whatever reason, their fetus would not be viable. Instead of having an abortion, the hospital helped a woman bring her baby to term, and have a natural delivery. Just last year, St. Vincent’s set up the Gianna Medical Center, the first pro-life women’s health care center in New York.

St. Vincent’s did things nobody else would do – what nobody else could do – guided by the gospel: “This is how all will know that you are my disciples, if you have love for one another.”

Archbishop Dolan said something beautiful about it just before the hospital closed. The work of St. Vincent’s goes on, he explained, in the people who worked there — their values, their faith, their compassion, their love.

And in a similar way, I think, the gospel goes on in each of us.

It goes on when we hear Christ’s call to love, and strive to live that love in the world.

It goes on in those who work tirelessly for the poor, the disenfranchised, the neglected, the abused. All those in the world today who are in “steerage.”

And I can’t help but think it goes on in our young people, those who want to be counted among the communion of saints–the Veronicas and Johns and Elizabeths and Francises, and all those who are completing their sacraments of initiation this Sunday.

That is our way as Catholic Christians.

And it was the way of those four Sisters of Charity 160 years ago.

We honor them and their legacy if we love as they did, care as they did. Maybe the story of St. Vincent’s isn’t over, as long as compassion and love guide the choices we make. The world might yet see new missionaries arrive to continue their work and, perhaps, transform the world.

“Behold,” the scripture tells us. “I make all things new.”

A Prayer to St. Joseph the Worker
archives most recent
More from Beliefnet and our partners
previous posts