The Lord is my goalie: a homily on hockey

It’s not every Sunday that a homily finds a connection between hockey and Jesus Christ. But a priest managed to do that last weekend:

Father Paul Noble isn’t the only Blue Jackets fan to suggest that players from his favorite team turned a deaf ear to the teachings of former coach Ken Hitchcock.

The Gahanna priest, however, might be the first to liken Hitchcock’s difficulties to those of a revered Biblical figure. 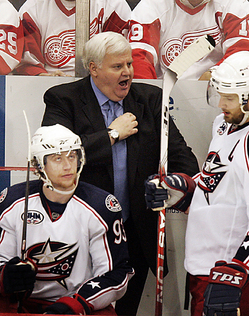 Noble delivered a homily Saturday in St. Matthew the Apostle Church in which he said Jackets players tuned out the message of Hitchcock the way people sometimes stop following the word of Jesus Christ.

The decision in each case, Noble opined, leads to confusion and a loss of direction.

“I was focused on readings about Jesus as the good shepherd: ‘My sheep hear my voice, and I know them, and they follow me,'” Noble said.

“I was just talking about a recognized hockey leader, one we know has a good philosophy and a track record of success. But the sheep were not following his voice anymore, and things didn’t work out.”

One member of the flock, Jackets rookie Nikita Filatov, returned to Russia in November, citing differences with the coach.

Hitchcock, winner of 533 NHL games and the 1999 Stanley Cup, was fired by the Blue Jackets on Feb.3, a season after leading the franchise to its only playoff appearance.

Noble, a Jackets fan since the team’s inception in 2000, said he thought the homily was well received by parishioners. Reached by phone yesterday, the normally loquacious Hitchcock wasn’t sure how to react.

“What can I say?” Hitchcock said. “It might be the first time in my life I’m at a loss for words.”

The 55-year-old Noble is a Detroit native who grew up a Red Wings fan but shifted his allegiance to the Jackets. His congregation at the Havens Corners Road church, he said, is accustomed to his sports analogies.

“Being from Michigan and living in Columbus, I periodically take the opportunity. That’s all I’m going to say,” Noble said.

Catholicism booming in Africa, Asia
archives most recent
More from Beliefnet and our partners
previous posts