Putting out into the deep, with a NET…

The good folks at the National Catholic Register have done a story about my station NET: 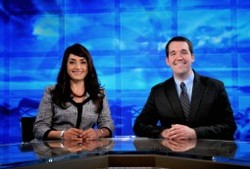 When the Brooklyn, N.Y., Diocese decided to launch a new faith-based cable TV channel to replace their Prayer Channel, they had no trouble with the name: New Evangelization Television (NET-TV).

“I have to start by thanking our late Holy Father John Paul II,” says the station’s general manager, Christopher Quinn. “We built a channel on the name he chose.” From the get-go, Quinn was inspired by John Paul II’s directive: “I sense the moment has come to commit all the Church’s energies to the New Evangelization.”

Besides, Brooklyn Bishop Nicholas DeMarzio has stated two personal goals that NET-TV also adopted: to be present to the people and to implement the New Evangelization for his diocese. Launched in December 2008, NET-TV is fulfilling both goals with its 24/7 programming on two of the area’s cable channels plus live and on-demand Internet viewing.

While the station broadcasts daily Mass from the Cathedral of St. James and the Rosary several times a day, it also carries an array of programming.

Among the lineup of series is the highly watched “Currents,” the first-ever Catholic daily news show; “Mysteries of the Church,” the second most-popular series; “iCTHuS.eQ” for youth, with contemporary Christian music videos (many local) and interviews with Catholic musicians; “Classic Cinema,” with family-friendly, faith-based movies; children’s shows like “BJ Teddy Bear Club and Bible Stories” and “Cherub Wings”; and local shows that explore New York’s churches, food, culture and neighborhoods. The streets of New York are one of NET-TV’s “studios.”

Quinn explains the rationale for this eclectic programming: “Jesus reached out to prostitutes, so this is our way to go to those who are disenfranchised.” Quinn calls the overall approach the same Gospel, “but put it in a new, fresh way to evangelize.”

Check out the rest. Your Humble Blogger makes a cameo appearance.