No comments — and here’s why

I haven’t posted a comment since you left blogspot, and that’s primarily because I no longer feel welcome. If the old saying, “If you can’t stand the heat, stay out of the kitchen…” holds true, then let’s just say I’m not exactly wearing a parka. I love your blog and (at one time, back at blogspot) I enjoyed reading the comments and the polite, genuinely-Christian discourse. People aided one another in their search for truth. I like to think that people ignored the more vitriolic comments (which were mild by these beliefnet standards) and focused on the good.

A different audience is now reading your blog and commenting. As someone that has learned much from you and who admires the mission that you began lo those many years ago, I think it’s time you reevaluate the role of comments in your blog. They are no longer uplifting or Gospel-centric. Indeed, the anger and the backbiting are childish — and arguably sinful. I would never accuse you of condoning this, but as a member of the clergy, this is *your* “marvelous experiment in bloggery.” You do not have to tolerate the anger, the vitriol, or the hate. Differences of opinion are one thing, but just as a simple example, during the months leading up to the 2008 Presidential Election, I don’t remember reading a single post by any commenter that questioned the sexual orientation of another commenter or seeing a commenter-so-questioned respond with such utter disdain. Then-Senator Obama had many slings and arrows levied his way, but I saw buried behind each one a deep hope that he could change, not a condemnation…

…You don’t have to do away with the comments if you don’t want to; as I’ve said, they were once an edifying part of your experiment. But things can’t keep going as they are. Even if I personally choose not to read them any longer, other unaware browsers may read them, children might read them (who would have ever thought a Deacon’s blog would be inappropriate?), or, if nothing else, the poor souls making these posts will continue to muddy themselves and others. You had sitting on the sidebar of your blogspot blog, “What would Jesus blog?” and so I beg you to please take my post with the warmth of Christian love that I have for you and your entire online flock, of which I consider myself a joyful (although, lately, crestfallen) member. Know that I pray for you and your ministry — both in the world and the online world. And I thank you for the many prayers you have said for me on those times that I have contacted you in my hours of need.

I know who wrote that.  We’ve corresponded in the past, and I trust and value his opinion. And I know he’s absolutely right. I’ve sensed it. Loyal, longtime readers have sensed it. Some have written me about it.  Even casual passers-by have taken notice, and quickened their step when they walk through the neighborhood.  The atmosphere around these parts is beyond unfriendly and uncharitable.  At times, it borders on vengeful and, yes, evil.

I’m going to turn off comments on all posts for a while. Maybe a week. Maybe more. (Someone suggested shutting them down until Pentecost, to let the Holy Spirit do some work.) I don’t know about that.  But I do know that we all need to take a deep breath, and rethink what we’re doing here.

I never intended The Deacon’s Bench to become a place for knees in the groin and brass knuckles to the jaw.   God knows, I also never thought it would turn into a place for escalating violence, where one commenter pulls out a knife, until another whips out a pistol.  Lively debate is one thing.  Relentless, merciless hate is something else.  (For my part, I may think twice about some of the stories and news items that I post, as well.    I’m a deacon, not a referee, with a demanding full-time job and a part-time parish ministry to practice.  I don’t have the time to mediate every fight or catechize every stranger who wanders by and wants to know what all the screaming is about.)

Among the deacon’s first words in the mass are “Lord have mercy.”  His last are “Go in peace.”  As those words frame the celebration of the Eucharist, I want them also to frame my work here. 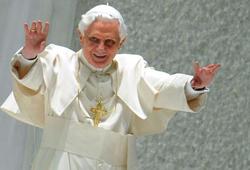