In homily, priest calls for pope to resign

In what may be a first, anywhere, an outspoken Massachusetts pastor this weekend used his Sunday homily to call for Pope Benedict’s resignation: 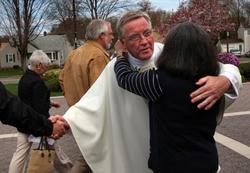 The Rev. James J. Scahill describes himself as “rather a reclusive person.” He insists he is no rebel.

But the parish priest from East Longmeadow was fielding media calls from around the country yesterday about his request from the pulpit on Sunday that Pope Benedict XVI step down over his handling of clergy sexual abuse.

In an interview, Scahill sounded exhausted but firm as he reasserted his critique of the pope: “The right thing is to be truthful, and if he is not up to dealing with this, then he should have the integrity to resign.”

Scahill has been an outspoken critic of the church’s handling of sexual abuse cases since shortly after he arrived at St. Michael’s church in 2002, the year the clergy abuse scandal exploded in Massachusetts.

He infuriated the local church hierarchy by withholding payments to the Springfield Diocese until it did away with a fund to assist dismissed priests.

He made national news by pressing for a fuller investigation of the 1972 killing of a Springfield boy whose parents attribute their son’s death to an abusive priest.

And he helped to reveal the sexual misconduct of former Springfield Bishop Thomas L. Dupre, who abruptly resigned after he was confronted with accusations that he had abused children as a parish priest.

“Most of what Father Scahill charged was true, and what he asked for, in a fairly sharp tone of voice, was often what many people would regard as necessary,” said David O’Brien, director for the Center for Religion, Ethics and Culture at the College of the Holy Cross in Worcester.

Yesterday, walking from his office to the church where a local television crew was waiting, Scahill said the reaction to his homily has been overwhelmingly supportive.

“I’m simply speaking the truth,” he said. “Sometimes the truth can be harsh.”

He said he hoped there would be “a grass-roots insurrection of calling for accountability.”

Opinion did seem to be running strongly in his favor at Romito & Sons Delicatessen on North Main Street, not far from St. Michael’s.

Lifelong Catholics MaryAnn O’Hagan, 60, and her husband, Carl Gahm, 71, said Scahill’s sermons have kept them attending Mass each week, in spite of their dismay over the church leadership’s handling of the sexual abuse scandal.

“To come out with the courage Father Scahill did was incredible,” said Gahm. “Not one single bishop, archbishop, or cardinal has called for a resignation or accountability of the pope.”

For Don Millett, however, who often attends Mass at St. Michael’s but was not there Sunday, it went a bit too far. “When you go to church, that’s not what you want to deal with,” he said.

Check out the link for more on this story.

Bishop Timothy A. McDonnell faulted Scahill for bringing up the issue on a Sunday meant to foster reconciliation and forgiveness in the church.

“There is a sad irony in that Father Scahill’s remarks were delivered on Divine Mercy Sunday,” said McDonnell, adding the church has expressed “tremendous sorrow, sadness and shame” about clergy abuse cases.

“The church leadership knows how difficult it is for those who have suffered abuse at the hands of clergy who should have been signs of God’s love rather than inflictors of pain,” the bishop said.” Here in the Diocese of Springfield, as in trouble throughout the United States and beyond, we are vigilant in the efforts undertaken to ensure such tragedies can never happen again.”

Vatican on Beatles: Let's let it be
archives most recent
More from Beliefnet and our partners
previous posts