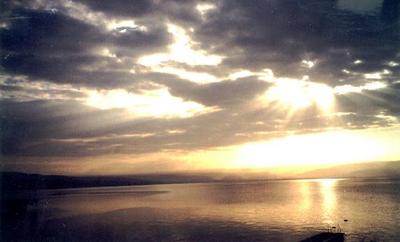 A few days ago, I was contacted by a reporter at the New York Post. She was doing a story for Easter, all about being Catholic in 2010. She wanted to hear my thoughts, especially in light of some of the headlines that have been in the news lately. I agreed to talk with her, but we kept missing each other, and she was on deadline, and I had obligations here at church, so the interview never happened.

I don’t know if she got the story she was looking for. But I wish she could be here tonight. You can’t find a greater story than what we are witnessing in this church.

Here, and now, we are seeing the ongoing miracle of not just any story, but the Greatest Story Ever Told. You and I are a part of it. The seven people who are candidates and catechumens in our church tonight, about to join our faith, they are a part of it. Over a billion people around the world are a part of it.

The statistics are staggering. In 2008, 19 million people entered the Church. That’s 2,169 every hour. 36 every second. And the numbers just keep growing.

We could speculate why that’s so. But ultimately, it comes to this: they are drawn by hope. It is a hope that is stronger than despair… a truth that towers over a world of falsehood… the Light of the World that scatters every darkness.

That, in all its greatness and mystery and wonder, is our faith.

I’ve spent the last couple of days thinking about the question that reporter was seeking to answer. What does it mean to be a Catholic today?

And the story goes on.

It is the story of faith on a mission: “The pilgrim church on earth.” It is the story of a journey — from Jerusalem to Rome to Africa…to India and Asia and islands in the South Pacific. It is a mission that eventually brought people to America, and a place called Brooklyn.

It is about the people who made that mission happen: sisters and brothers, priests and religious and lay people by the millions who did the unsung, heroic work of building up the church, often at enormous sacrifice, sometimes paying with their lives. It is immigrants who gave spare change to build churches, and nuns who cared for the sick when no one else would, and who taught our parents and grandparents and great grandparents. It is priests who celebrated mass in auditoriums and gymnasiums, and who walked arm in arm through the south with Martin Luther King.  It is standing in solidarity with the smallest, the weakest, the defenseless: the unborn.

What does being a Catholic today mean? It is parents giving up vacations so their kids can go to Catholic school.

It’s those same kids giving up their weekends to be altar servers.

It is May Processions and First Communions and fish fries and bingo. It’s the crèche at Christmas, and this candle at Easter.

It’s the cry of a baby being baptized. It’s the gentle voice of the priest offering absolution to someone who hasn’t been to confession in 20 years – and offering a chance to begin again, and to be made new. And it is silence, the thundering silence of people who come here on any given weekday to light a candle, say a rosary, and pray.

It is the thousands who crowd into this church on an ordinary Wednesday in the middle of the winter to receive ashes.

It is the hundreds who came here just last night to behold the wounded, scarred face of Christ – and venerate his cross with a kiss.

It is the anonymous strangers who stop by the statue of the Blessed Mother outside the church, and leave roses, or folded scraps of paper with petitions. “Mary, pray for my son. Mary, help me find a job.”

Beyond what it may appear to the world out there, it is, most importantly, what we cherish in here. And that is — overwhelmingly — the Eucharist: Christ himself, placed before us, as small as a coin, as vast and limitless as the universe.

That is what I’d like to have told the reporter. But this night, I’m telling you. And maybe you can spread the word.

Because this is a headline the world needs to know: we are people of resurrection. Easter people. People of hope. People carrying within us, and into the world, the light of Christ.

And that is how we live out, in our own way, the Greatest Story Ever Told.

And this night — by the grace of God, with ‘Alleluias’ in our hearts and on our lips — the story goes on.