That’s what the lead headline at New Advent is teasing, with an announcement reportedly set for tomorrow.

Archbishop Jose Gomez, of San Antonio, has a fascinating resume — including being born in Mexico, and being ordained a priest of Opus Dei after getting degrees in both philosophy and accounting (!).

He’s been named by Time magazine as one of the 25 most influential Hispanics in America.

And, while Gomez doesn’t appear to have extensive experience in academia or priestly formation — which Benedict seems to favor in many of his bishops — according to his official biography, he “played a key role” in the establishment of the Hispanic Seminary of Our Lady of Guadalupe in Mexico City. 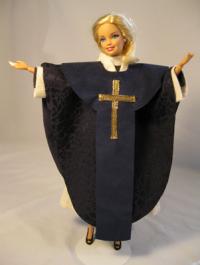 And now, meet Reverend Barbie
archives most recent
More from Beliefnet and our partners
previous posts