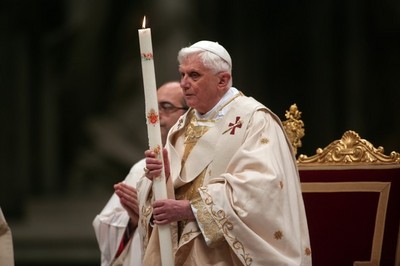 That idea may seem farfetched to some, especially now. But Ross Douthat argues that Benedict may be remembered by history for being a better pope than his celebrated predecessor:

The last pope was a great man, but he was also a weak administrator, a poor delegator, and sometimes a dreadful judge of character.

The church’s dilatory response to the sex abuse scandals was a testament to these weaknesses. So was John Paul’s friendship with the Rev. Marcial Maciel Degollado, the founder of the Legionaries of Christ. The last pope loved him and defended him. But we know now that Father Maciel was a sexually voracious sociopath. And thanks to a recent exposé by The National Catholic Reporter’s Jason Berry, we know the secret of Maciel’s Vatican success: He was an extraordinary fund-raiser, and those funds often flowed to members of John Paul’s inner circle.

Only one churchman comes out of Berry’s story looking good: Joseph Ratzinger. Berry recounts how Ratzinger lectured to a group of Legionary priests, and was subsequently handed an envelope of money “for his charitable use.” The cardinal “was tough as nails in a very cordial way,” a witness said, and turned the money down.

This isn’t an isolated case. In the 1990s, it was Ratzinger who pushed for a full investigation of Hans Hermann Groer, the Vienna cardinal accused of pedophilia, only to have his efforts blocked in the Vatican. It was Ratzinger who persuaded John Paul, in 2001, to centralize the church’s haphazard system for handling sex abuse allegations in his office. It was Ratzinger who re-opened the long-dormant investigation into Maciel’s conduct in 2004, just days after John Paul II had honored the Legionaries in a Vatican ceremony. It was Ratzinger, as Pope Benedict, who banished Maciel to a monastery and ordered a comprehensive inquiry into his order.

So the high-flying John Paul let scandals spread beneath his feet, and the uncharismatic Ratzinger was left to clean them up. This pattern extends to other fraught issues that the last pope tended to avoid — the debasement of the Catholic liturgy, or the rise of Islam in once-Christian Europe. And it extends to the caliber of the church’s bishops, where Benedict’s appointments are widely viewed as an improvement over the choices John Paul made. It isn’t a coincidence that some of the most forthright ecclesiastical responses to the abuse scandal have come from friends and protégés of the current pope.

Has Benedict done enough to clean house and show contrition? Alas, no. Has his Vatican responded to the latest swirl of scandal with retrenchment, resentment, and an un-Christian dose of self-pity? Absolutely. Can this pontiff regain the kind of trust and admiration, for himself and for his office, that John Paul II enjoyed? Not a chance.

But as unlikely as it seems today, Benedict may yet deserve to be remembered as the better pope.

Do read the rest.