What is Passion Sunday?

Those of us who are of a certain age (cough, cough) remember references to it from the ’60s. But that fell out of fashion. If you’re curious, the good people at New Advent have a comprehensive explanation: everything you always wanted to know about Passion Sunday but were afraid to ask.

Eons ago, back before 1970, the season of Lent had a slightly different structure than it does now. If you happen to look at a missal from back then, you’ll notice that there are only four Sundays of Lent, followed by Passion Sunday, followed by Palm Sunday. In a current missal you will typically see that Palm Sunday is now labeled “Passion (Palm) Sunday”.

Why is this? What did a separate day signify before 1970? 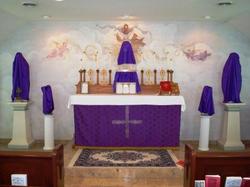 According to Dom Gueranger in The Liturgical Year, “This Sunday is called Passion Sunday, because the Church begins, on this day, to make the sufferings of our Redeemer her chief thought”. Traditionally, all statues and crucifixes were veiled at the Vespers for Passion Sunday. The Introit, Gradual and Tract all are petitions to save the just from the persecution of the unjust and the Tract even foreshadows the scourging.

So why was this Sunday eliminated from the liturgical year?

According to Cardinal Bugnini in his Reform of the Liturgy, “Also suppressed as a title is ‘Passiontide.’ The whole of it now becomes, even externally, a part of Lent…The readings and prayers used in antiquity on the third, fourth, and fifth Sundays have been restored (the Sundays of ‘the Samaritan,’ ‘theMan Born Blind,’ and ‘Lazarus’). The final two weeks are dominated by preparation for the celebration of the passion.”

And so, on March 21, 1969, the Sacred Congregation of Rites published the General Norms for the Liturgical Year and the Calendar which stated that “The Sundays of this season are called the First, Second, Third, Fourth, and Fifth Sundays of Lent. The Sixth Sunday, which marks the beginning of Holy Week, is called Passion Sunday (Palm Sunday).”

In spite of the suppression of Passion Sunday, the tradition still echoes in the new rite. It is still permitted to veil the statues and crucifixes at vespers before the fifth Sunday of Lent if your parish wants to do it before Holy Thursday. You can also still hear, if your parish uses the propers of the season, Psalm 42, 1-2 as the Introit on this day. “Judge me, O God, and distinguish my cause from the nation that is not holy: deliver me from the unjust and deceitful man: for thou art my God and my strength…”

Visit the link for more. And Happy Passion Sunday, y’all.