The celebrated humorist and radio host is scheduled to speak at a Catholic gathering next month — and it’s raising a few eyebrows: 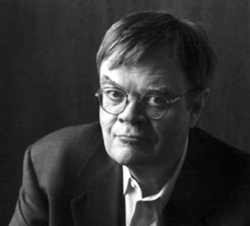 The National Catholic Education Association (NCEA) has invited Garrison Keillor, a pro-abortion, pro-gay “marriage” Episcopalian, as a keynote speaker at the group’s annual convention. Keillor, well-known as a humorist and host of A Prairie Home Companion, has repeatedly published his pro-abortion, pro-same-sex “marriage” views – and has labeled pro-life, pro-family, and anti-pornography activists “shrieking ninnies and pompous blowhards.”

On the issue of abortion, Keillor has been quoted as saying it should be decided “case by case,” and that disabled embryonic children should be destroyed.

“The use of abortion as birth control is one thing, the use of it to end pregnancy caused by incest or rape is another, and then there is the decision to destroy an embryo that shows signs of debilitating disease or severe retardation,” said Keillor in an interview with Nathan Callahan in 2004.

“In the end, it goes against common sense to require a mother to bear a child she does not want, just as you can’t force husband and wife to stay together.”

Keillor also decried “the so-called cultural wars over abortion and prayer in the schools and pornography and gays,” most of which he said was “instigated by shrieking ninnies and pompous blowhards” who “did nothing about anything, except elect dullards to office who brought a certain nihilistic approach to governance.”

On same-sex “marriage,” in a January column for the Salt Lake Tribune, Keillor said, “I believe that if voters actually knew gay couples, they would not vote to ban gay marriage. This particular cruelty is the result of social separation, which breeds contempt.”

Keillor is slated to address the NCEA at 9 a.m. on Wednesday, April 7. The NCEA did not return LifeSiteNews.com’s request for comment as of press time.

In 2001, the dioceses of Pittsburgh, Penn. and Peoria, Ill. boycotted the NCEA for granting a speaking opportunity to Sr. Joan Chittiser, a Benedictine nun who famously dissents from Catholic teaching on homosexuality and female ordination.

Meantime, that’s clearly not how the NCEA sees things. This is how it announced Keillor’s appearance last fall:

Garrison Keillor, host of the long-running radio show A Prairie Home Companion, will give a keynote address at the 2010 NCEA convention on Wednesday, April 7 at 9 a.m. Keillor is known for the coupling of his shy, introspective persona with a sharp wit and keen sense of humor. His small-town wisdom and warm observations of everyday life have endeared him to millions in the US and around the world.

Keillor is best known for his storytelling, and his weekly yarns about the fictional town of Lake Wobegone have been collected into several recordings. He has also written books set in the town, the most recent being Wobegone Romance. Keillor has put out a gospel album with the Hopeful Gospel Quartet and starred in a major motion picture, 2004’s A Prairie Home Companion. He is an internationally known speaker and a contributor to The New Yorker, the New York Times and The Atlantic Magazine.

"For advice on confessions, press one..."
archives most recent
More from Beliefnet and our partners
previous posts