Staying together for the mortgage

The recession may be hard on the pocket book, but it may be keeping together more marriages, as a result: 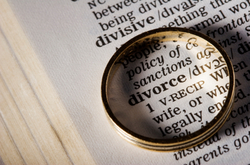 In the Great Recession, breaking up is hard to do.

With housing values depressed and jobs disappearing, divorce has become a luxury beyond the reach of some couples. There is often not enough money to pay for separate households or to hire lawyers, fight over children and go to court.

What has always been painful is now desperate and confounding, with a growing number of couples deciding to wait out the economic storm while others take new approaches — such as living together as they separate.

“I have lots of files sitting in the drawer, where people can’t move forward,” says David Goldberg, a divorce lawyer and mediator in Gaithersburg. He has been working in family law for 44 years and says he has never seen a time like this one.

Lately, he said, “I have a lot of clients who have ended up in bankruptcy.”

The difficulties of divorce in the downturn are familiar to Paulene Foster, a 42-year-old federal worker from Olney, who says her precarious finances forced her to wait a year. If that wasn’t enough, she also shared a house with her estranged husband — him in the basement, her upstairs. Strapped months went by as the couple were saddled with a suburban townhouse that would not sell.

Her divorce, filed last month with a $105 check after going to a self-help law clinic in Montgomery County, comes as the national rate of failed marriages has declined slightly — not necessarily because divorce-minded couples are happier than before but, some experts suggest, because they don’t have the money to call it quits.

At one Woodbridge law firm, 20 to 25 percent of clients seeking a divorce live under the same roof as their estranged spouse to save money as they await court action.

Other couples say they are stymied by the grim reality that they owe more on the family home than they could get if they sold it.

How do they start over if debt is all that’s left to divide?

Heather Hostetter, who has a divorce practice in Bethesda, said that many couples used to divorce with enough equity in a house so that both spouses could re-create lives not so different from their old ones.

“It used to be you could go own another home,” she said. “Maybe it’s a little smaller, maybe it’s not in the same neighborhood.

“Now you see people who go from homeowners to renters.”

Check out the WaPo link for more.