Inspiration for a life of whoa

Well, out of Hawaii comes this item, and it’s certainly something I haven’t seen in New York City:

Attend any Big Island rodeo and you will see small leather crosses attached to the saddles of many of the riders. 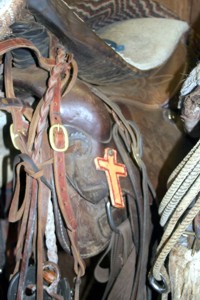 Each cross — a simple, durable profession of faith in God’s protection in a rough and sometimes dangerous occupation — is a gift from a Catholic man who himself has spent many years in the saddle.

Eighty-three-year-old William Andrade, a lifelong Big Island cowboy, hand-crafts the crosses and has them blessed by a friend of his who is a deacon. He has given away more than 300 of them over the past year at ropings throughout the island.

The robust outdoorsman, who is a parishioner of Our Lady of Lourdes Parish in Honokaa, first made the leather symbols for his family.

“What happened was I started making some for my grandchildren and children,” he said. “Then I started giving them to friends. All of a sudden — ho! — more and more people just kept asking for them.”

Andrade started giving away the crosses to cowboys of all beliefs — Christian and non-Christian.

The Big Island of Hawaii is known for its cowboys, or “paniolos,” a name derived from the Spanish “espanol” in the early 1800s, when the first Spanish-speaking Latin Americans arrived to work on ranches. Ranching led to rodeos, with its cattle roping, bull riding and barrel racing.

“In the state of Hawaii, there is roping on Maui, Molokai, Kauai and Oahu,” Andrade said. “There is roping all over and there are rodeos all over.”

Andrade grew up on a ranch in verdant Ahualoa, about 15 miles from Waimea on the Big Island, with his parents and six brothers and sisters. He learned leatherwork while repairing his own saddle and the saddles of friends and family.

Making each cross takes about 20 minutes. In his workshop in the back of his garage, Andrade cuts the cross shape from a scrap piece of leather with a knife. He then squares it off on a grinder. He oils the leather with a special wax, stamps and colors a border design, and rubs it again with a leather finish.

“It takes time, but on a rainy day, with nothing else to do, I come up and do it,” he said.

Andrade builds up a collection of about 50 crosses before he invites Deacon Larry Ignacio of Honokaa over to bless them. Andrade and Deacon Ignacio, who are both retired firefighters, worked together in the same station for more than 15 years and have remained close since then.

“He is touching so many hearts with those crosses,” Deacon Ignacio said.

You can read more about it at the link.

read next post
"Extra small" condoms for boys?
archives most recent
More from Beliefnet and our partners
previous posts