As one friend of mine noted, reading this item, “We live in interesting times…” : 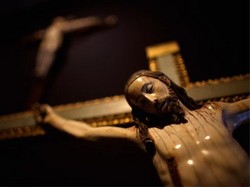 One week before the most solemn day in the Christian year, the city of Davenport, Iowa removed Good Friday from its municipal calendar, setting off a storm of complaints from Christians and union members whose contracts give them that day off.

Taking a recommendation by the Davenport Civil Rights Commission to change the holiday’s name to something more ecumenical, City Administrator Craig Malin sent a memo to municipal employees announcing Good Friday would officially be known as “Spring Holiday.”

“My phone has been ringing off the hook since Saturday,” said city council alderman Bill Edmond. “People are genuinely upset because this is nothing but political correctness run amok.”

Edmond said the city administrator made the change unilaterally and did not bring it to the council for a vote, a requirement for a change in policy.

“The city council didn’t know anything about the change. We were blind sided and now we’ve got to clean this mess up. How do you tell people the city renamed a 2,000 year old holiday?” said Edmond.

It didn’t take long for the city the resurrect the name Good Friday. Malin was overruled today and the words “Spring Holiday” disappeared.

The Civil Rights Commission said it recommended changing the name to better reflect the city’s diversity and maintain a separation of church and state when it came to official municipal holidays.

“We merely made a recommendation that the name be changed to something other than Good Friday,” said Tim Hart, the commission’s chairman. “Our Constitution calls for separation of church and state. Davenport touts itself as a diverse city and given all the different types of religious and ethnic backgrounds we represent, we suggested the change.”

News of the change could not have come at more significant time in the Christian calendar. News of the name change spread through the town on Palm Sunday, the beginning of Holy Week, becoming a topic of conversation at church services throughout Davenport.