Weddings at sea hit an iceberg

I’m surprised at how often requests come in to my parish to have a Catholic wedding outside of a Catholic church. (It’s almost never permitted, by the way.) Now, the church is making clear that the prohibition extends beyond catering halls and beaches, to cruise ships: 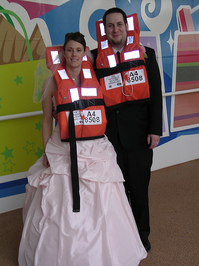 It is not just sea, sun and celebrating the sacraments for Catholic chaplains aboard cruise ships.

Regional directors of the Apostleship of the Sea meeting at the Vatican Feb. 9 ratified a document clarifying the role of chaplains who serve on board cruise ships.

Among its provisions, the document stipulated that priests should not celebrate Catholic weddings on a cruise, but they should be available to offer blessings for newlyweds or couples celebrating wedding anniversaries. It also stated that priests should offer daily and Sunday Masses, as well as ecumenical prayer services when required.

Chaplains should make themselves available for pastoral care and counseling not only with passengers but also the crew, hotel staff and even the entertainers aboard ship, the guidelines said. Chaplains are also encouraged to attend staff and employee meetings during a cruise to better understand the issues and concern of the people working on board.

The new guidelines asked cruise ship companies to provide chaplains with a private cabin and all standard meals. They are also asked to provide everything necessary to celebrate Mass, including vestments and chalices, and to advertise all the public activities of the chaplain while on board.

Archbishop Antonio Maria Veglio, president of the Pontifical Council for Migrants and Travelers, which oversees the Apostleship of the Sea, said the recent growth of the cruise ship industry prompted the writing of the new “Cruise Ship Ministry Guidelines.”

The document will be published later in the year as part of the 90th anniversary celebrations of the Apostleship of the Sea, an organization started in 1920 in Glasgow, Scotland, to oversee the Cchurch’s mission to Catholics workers in maritime industries.

On a related note: several years ago, my wife and planned to celebrate our wedding anniversary at Disney World and wanted to renew our vows on the resort property. The Diocese of Orlando refused. I wrote them a letter, explaining that this wasn’t a sacrament, it wasn’t a wedding, it was just a simple renewal of vows and a blessing. They still wouldn’t do it.

Disney found us a nice Methodist minister who was happy to oblige.