Spark of the divine: the seminarian who carried the Olympic torch

With the Olympics now underway, I finally caught up with this remarkable story of one of the Canadians who carried the torch earlier this month: 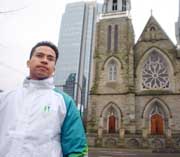 The Olympic spark has been ignited within the soul of Vancouver seminarian Noel Oco, one of those carrying the Olympic torch through Vancouver prior to the 2010 Winter Olympic Games.

Currently serving at Our Lady of the Assumption Parish with Father Ron Thompson, his spiritual director, Oco is just months away from becoming a member of the Carthusians. He hopes to make his final commitment with a vow of lifelong poverty and silence.

Oco gained the privilege of carrying the torch after winning an essay competition. “No matter how powerful the Olympic flame is and what it represents, the flame inside each of us is greater than that flame. What the Olympic flame does is reflect off each of us and inspire us to live up to the ideals of the Olympic movement,” he said.

His message to the world concerns vocations: he wants to inspire others to discern their own vocations, whatever they may be.

Oco never thought of becoming a Catholic priest when he was young. Although he grew up Catholic, he was not really paying attention to what the Church was all about: “I just went through the motions.”

However he met atheists, Jehovah’s Witnesses, Mormons, Protestants, Muslims, Buddhists and people of other faiths who challenged his Catholicism to the limit. “I used those moments of being challenged to search deep within the actual teachings of the Catholic Church to understand what it was to be a real Catholic.”

Determined to pursue God’s will, he worked at a variety of jobs that captured his interest.

None of them were good enough, however. “I needed more meaning than just earning a good salary,” he said.

It was when he entered the Canadian Forces Army Reserve that he learned to live and rely on daily prayer. “I prayed for God’s strength to help me pass the three-month boot camp. With the Lord’s help I succeeded without any problems,” he said.

During his time in the Army he deepened his spiritual life. “I enjoyed the sense of adventure, the discipline, the structure and the camaraderie among the many friends I gained, and with whom I shared my faith one-on-one whenever I got the chance.”

One night, in bed after an exhausting weeklong joint military training with the British and U.S. Army, he hit a plateau.

read next post
Ash not: attorney told to take off ashes in the courtroom
archives most recent
More from Beliefnet and our partners
previous posts