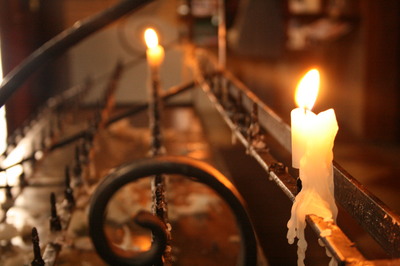 Last year, the writer Mary Karr published a beautiful memoir of her life, and her conversion to Catholicism. Some have actually compared it to the “Confessions” of St. Augustine. The book is called “Lit.” The title refers to literature, but also to the idea of carrying within you a kind of light, of being “lit.”

It’s not always easy reading. Karr writes about growing up in an abusive, alcoholic home…about her early, unsatisfying marriage…about her own struggles with addiction and time she spent in a mental hospital.

At one point, she describes her father’s final illness. The family knew he was deteriorating, and they brought him home to die. He often had difficulty speaking. But repeatedly, surprisingly, he managed to communicate one simple word: “Garfield.” Well, he had an orange Garfield the cat coffee mug by his bed, and people thought he was talking about that.

But his daughter Mary realized, after a time, the real meaning and poignancy of that one word: “Garfield.” He wasn’t talking about a cartoon cat. He never even read the comic page in the paper. No, Mary realized: that word meant something else. It was the family’s address — 4901 Garfield Street. He was talking about where he lived. “Garfield,” to him, meant home. Safety. Security. Even, perhaps, love. He wanted everyone to know that was where he was, where he wanted to be, and where he belonged.

It’s one reason we are here, on this ordinary day, in the middle of an ordinary week, to declare our desire, our yearning, our hope. We want to return to God.

We want to be home.

It turns out, that’s what God wants, too. “Return to me, with your whole heart,” we hear in the first reading from Joel. We are prodigal children, who have drifted away. We need to be back where we belong, in the arms of a loving father.

And so we begin the return: Lent, the long 40-day walk back.

Lent is a penitential season, a time for doing without. Ashes are just the beginning. Our music becomes simpler, our liturgies plainer. The “Gloria” is gone. We fast, we pray. We may give up chocolates or meat or television. But for all of this season’s sobriety, we shouldn’t lose sight of something vitally important: this is a journey we undertake with joy.

Part of that is because we are seeking to draw closer to God – the source and summit of our happiness. But part of it, I think, is something else, too.  Something that goes to our roots as Catholic Christians.

It’s right there, in our baptism. When we were baptized, our parents and godparents received a tiny flame, a burning candle, with the words, “Receive the light of Christ.” Well, that light still burns. Maybe it’s dimmed. Maybe it is only a small ember now. Maybe it’s had to struggle against wind and cold. Maybe we’ve ignored it, or forgotten it.

But the light is there.

So yes, this day is about ashes.

But Lent? Lent is about that fire.

Over the next 40 days, let’s ask ourselves: how can we fan the flame, and make it grow? How can we turn a flicker into a blaze?

Or to borrow the title of Mary Karr’s book: how can we affirm to the world that we are lit?

In a few moments, ashes – the remnant of a flame — will be placed on your forehead. And the great work of these 40 days will begin. Work of conversion and repentance. The work of praying more faithfully, loving more deeply.

And when you go into the world today, those ashes will speak volumes – about belief, about commitment, and even about hope. People will pass you on the street, see you at the office, sit beside you on the subway. They’ll notice something different.  They may give you a curious look at Key Food, or stare at your forehead when you step up to the counter at the bank.

Most of them may only see the ashes.

But strive for something else. Strive to let them see the flame.

Strive to bring them the light of Christ.

Because these 40 days are about much more than ashes. They are about that light — and about rediscovering something we may have too easily forgotten.

In spite of sin and indifference, in spite of living in a world crowded by cynicism and doubt, we are still what our baptism proclaimed us to be. We are “children of the light.”

And the candle still burns.