Beat the clock: welcome to the 15-minute mass

And it’s causing a small sensation in Ireland: 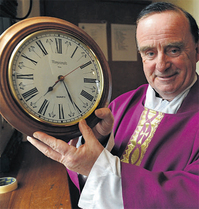 An Irish cleric’s congregation has increased tenfold in a week — thanks to a quickie Mass.

Despite the controversies which have rocked the church in recent years and the resulting fall-off in attendances at church services, Fr Michael Kenny has been packing them in at his Kilconly parish in Co Galway.

The popular priest started his 15-minute Mass as nothing more than an experiment at the start of Lent, just over a week ago. And he attributes the speed of the service to foregoing a sermon — and having the help of a Eucharistic minister for communion.

The regular morning Mass at 9am had been drawing an attendance of just three or four up to the start of his no-frills experiment.

Fr Kenny decided to bring the time back to 7.30am and guarantee he would keep parishioners no longer than a quarter of a hour.

Attendances at the small north Galway parish church have now soared to between 30 and 40, with Mass-goers walking out the door by 7.45am.

“The general view among parishioners is that the 9am Mass was totally unsuitable for people going to work.

“Now, more and more people are coming along to the Mass at 7.30am as they know they can be on their way to work or school 15 or 20 minutes later and it is far more suitable,” said Fr Kenny.

You can find more about it at the link.