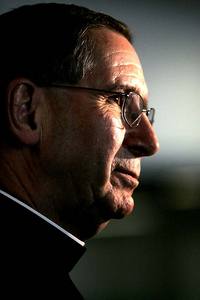 I am hearing, on reliable authority, that the Cardinal Archbishop of Los Angeles, Roger Mahony, has approved a coadjutor bishop recently selected for him by the Holy See. This news – and the name – will be publicly announced “soon.”

This new bishop, once announced and appointed, will automatically succeed Mahony as the Archbishop of Los Angeles as soon as Mahony retires, presumably before Mahony’s mandatory retirement at age 75 (February 27, 2011). Mahony has said that the current class of seminarians will be the last one he personally ordains.

Some of the faculty at St. John’s Seminary – where new priests for the Archdiocese of Los Angeles are trained – have expressed concern that the new coadjutor bishop will lean more “conservative” than his predecessor, and some have even threatened to resign or retire if this turns out to be the case.

UPDATE: Comments have gotten out of control here.  I’m shutting them down. Dcn. G.

read next post
The best man for an important job in the church...
archives most recent
More from Beliefnet and our partners
previous posts