“GTG.” “BRB.” “LOL.” “ROFL.” Anyone who’s sent or received a text message knows what those mean. Last week, I read a story that put them in perspective. 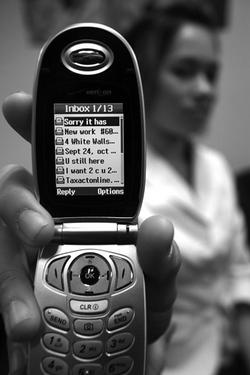 It was about a monologue, on radio, delivered by Adam Gopnik, a writer for the New Yorker. He said that he’s learned to keep in touch with his 12-year-old son by sending instant messages back and forth. It’s almost replaced ordinary conversation. He described sitting next to his son on the sofa in the living room, watching a hockey game, and the two of them didn’t even talk. They just sent text messages back and forth.

Anyway: Gopnik’s son, Luke, over time taught his dad the different abbreviations – “GTG” for got to go…”BRB” for be right back. And for a long time, his dad needed no help understanding the meaning of “LOL.”

He just assumed it meant – logically – “Lots of love.”

For the uninitiated: no. It means “laughing out loud.”

Gopnik’s son finally broke the news of what “LOL” really means. His father was a little embarrassed. But as he explained it, even miscommunication can bridge the divide between parent and child. They still end each day with a text message to one another. And they each end with those three letters: “LOL.” Laughing out loud. And, of course, lots of love.

I think we sometimes don’t understand the language of love -how to speak it, or give it, or receive it. And that is part of what Paul is talking about in his letter to the Corinthians.

This passage should be familiar. You hear it all the time at weddings. I know it was read at my wedding, 24 years ago. (It’s one of the few things I remember from that day.) And it’s even been used at funerals – most famously, perhaps, at the funeral for Princess Diana, where it was read by Tony Blair.

We hear it so much, we feel as if we know it.

But do we? Like love itself, this passage is often misunderstood, and misinterpreted.
The truth is that Paul wasn’t writing about marriage, or romance. That was the farthest thing from his mind.

In the year 56, when Paul was writing, the church in Corinth was a mess. There was feuding and factions and finger-pointing.  The early church was actually full of dissension and disagreement.

(I know: it’s hard to believe that the church would have people who disagree about things. It sounds incredible.  But it’s true.)

Paul wrote this beautiful letter to tell them, in effect, grow up, you’re missing that point!  That isn’t what it means to be a Christian! Being a Christian means, quite simply, to love. Not physical love, not romantic love. But something that the Greeks called “agape.” Sacrificial giving. Charity.  That is the love Paul was describing.

And so he offers this blueprint for how to live that love.
Twenty years after Christ’s death and resurrection, Paul, an itinerant tentmaker from Tarsus, crafts another kind of tent – the overarching idea that lies at the heart of the gospel. Something, like a tent, to shelter us, protect us, shade us.

And yes, that kind of love also, I think, makes the best marriages. But too often, we think of married love as something else, something wrapped in white lace, clutching roses, while people throw rice.

But this morning, we are challenged to think of love the way Paul did, and the way Jesus did: a pouring out, an emptying of everything for another. For Christ, it wasn’t lace and flowers. It was nails and thorns. It was a sacrifice beyond measure.  It sounds impossible to give that much.  And yet, even today, people do.

Friday, I got an e-mail from a deacon I know in Atlanta. He wanted to share with me some news.

Not long ago, he and his wife heard about an 18-month-old baby boy named Matthew. He was the grand-nephew of a friend of theirs, and he was born without kidney function. Two weeks ago, the deacon’s wife, Marie, underwent surgery and donated her kidney to this little boy whom she barely knew and wasn’t even related to.

That was remarkable enough.  But there was another detail that the deacon wanted me to know about.

“The problem that caused Matthew to not have kidney function,” he wrote, “was detected prior to his birth. The OB/GYN encouraged his mother to terminate the pregnancy. She refused.”

The rest is history.  Living history.  Mother, and child, and Marie, the donor, are all doing well.

And now, Matthew lives. Because of this extraordinary act of generosity, this act of love, this agape.

Our culture, I think, has forgotten what love truly means.  It’s about giving yourself away.  But we’ve forgotten that.  We’ve become comfortable and complacent.  We walk away. We terminate what is inconvenient or difficult, whether it’s a marriage or a pregnancy.

We don’t realize what love entails.

But every now and then, you hear beautiful and challenging stories like Marie and Matthew, and the message comes through.

But our faith calls us to something more. To be something more — for the person next to you in the pew…or for the homeless and the hungry of Haiti…or for any among us who are hurting, or alone, or grieving, or angry.

So: don’t consider this reading a romantic cliché, something that pops up at weddings or anniversaries.

Paul’s letter to the Corinthians is for each of us. It is a gift. And one we are meant to pass on to others.

read next post
"We have a church we busted our humps for..."
archives most recent
More from Beliefnet and our partners
previous posts