Here’s a pope quiz: how many are saints?

Not as many as you may think — and David Gibson raises a few interesting issues in his New York Times piece: 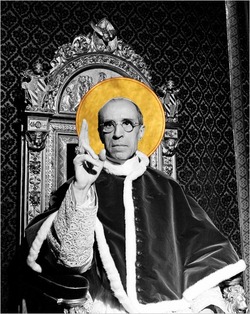 When Pope Benedict XVI approved a decree last month that nudged nearer to sainthood his controversial wartime predecessor, Pius XII, he sparked another round of the sort of Jewish-Catholic disputations that have marked his papacy, and even cast doubt on whether his trip to Rome’s main synagogue, set for Sunday, would go on.

The Vatican paired the announcement of Pius XII’s “heroic virtue” — the step before beatification, which would be followed by canonization, or sainthood — with a similar declaration about Pope John Paul II, who was considered a great friend to the Jews. No matter. Jewish leaders were furious, though Rome’s Jews decided to go ahead with the papal visit.

Pope Benedict’s decision of course renewed the longstanding debate over Pius’s World War II legacy (was he “silent” or even complicit in the Nazi extermination of the Jews?), but there is another question here that goes beyond Pius:

Should any pope be made a saint?

The church counts less than a third of all 264 dead popes as saints, and most were canonized by popular acclaim in the first centuries of Christianity, often because they were martyrs. Only five were canonized in the entire second millennium, and when Pius X, who died in 1914, was made a saint in 1954 — by Pius XII — he was the first pope so honored in nearly 400 years.

Now nearly every recent pope is on the canonization track. John Paul II beatified Pius IX, the 19th-century pope who is a polarizing figure because of his belief in the power of the papacy and his views on Judaism. But like Benedict, John Paul did a little ticket-balancing. He simultaneously beatified the popular John XXIII, who convened the liberalizing Second Vatican Council in 1962. The canonization process for Paul VI, who followed John XXIII, is underway, and there is a campaign to beatify John Paul I, who reigned a mere 33 days before his death in 1978.

This trend, by some accounts, is creating several problems.

Read on to find out what those problems are.