Devoted Mertonites (including Your Humble Blogger) will not be surprised at this bit of news, but it’s evidently raising a few eyebrows: 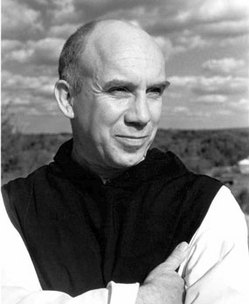 Rarely has a romance seemed so star-crossed. He was 51, she 25. She was a pretty, petite student-nurse; he was stocky and bald, with a roving intellect and a boisterous laugh.

He was also the most celebrated Catholic monk in America.

Margie Smith had read at least one of the books that made Thomas Merton famous when she walked into his hospital room in Louisville, Ky., in 1966. Over the next several months, the nurse and the monk wrote letters, drank wine, and fell in love, sneaking in and out of the Abbey of Gethsemani like love-struck teenagers.

“There is no question I am in deep,” Merton wrote in his journal just a month after meeting M., as he coded her name. Though some Merton biographers have been reluctant to reveal Smith’s full name–and still gasp at its disclosure–it has been published in recent years in biographies and national newspapers.

The cloistered Merton burst into public view in 1948 with the publication of his memoir “The Seven Storey Mountain,” which detailed his journey from a young rogue who wallowed in “beer, bewilderment, and sorrow,” according to a friend, to a penitent novitiate in the Order of Cistercians of the Strict Observance, the formal name of the Trappist order.

Merton went on to write a steady stream of spiritual books, essays and poems, and became one of the best known and well-loved Catholic writers of the 20th century. He died at age 53 in 1968 in a freak electrocution accident in Thailand.

Scholars and even casual Mertonites have long known of his affair with Smith, especially since his seven-volume personal journals, in which he pins down passing emotions like a butterfly collector, were published in the 1990s. But some disagree about whether the affair was a regrettable interlude, or an emotional breakthrough for a man who had long struggled with his feelings toward women.

A new Merton biography, “Beneath the Mask of Holiness,” falls firmly in the latter camp. Author Mark Shaw paints a portrait of the monk as a tormented, “imposter of sorts,” who reluctantly played the part of the happy, contemplative guru. In reality, Shaw argues, Merton was haunted by his youthful indiscretions with women–including reportedly, the fathering of a child out of wedlock–and the chasm between his private past and public persona.

You can find more at the link.

read next post
What really happened on Christmas?
archives most recent
More from Beliefnet and our partners
previous posts