The joy of travel

The first unhappy surprise that my wife and I discovered at the airport this holiday weekend: bag charges. Every. Bag. Checked. Ka-ching. The last time we flew, last summer, they let you check one for free. No more.

They don’t exactly make traveling with carry-ons easy these days, with limits on liquids and random bag checks and all, so it’s just easier to check them and not have to worry about it. But now even that once-standard practice is becoming a luxury.

After we swallowed that, and landed in DC, we went to Avis where, as a Preferred Member I’d reserved my usual standard-sized car. Imagine my surprise when I was told they didn’t have any. In fact, they didn’t have any cars. At all. I could wait an hour or two, for the possibility of a car arriving from Dulles. Or we could take one of these: 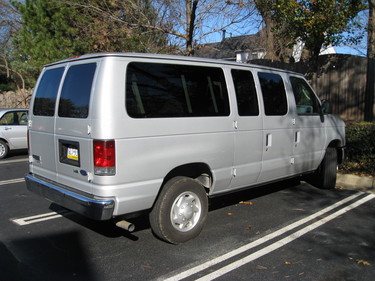 Since we had a Thanksgiving dinner to get to, and it was getting late, waiting another couple hours wasn’t an option.

I should mention here that the van was designed to hold 12 people.  I should also add that there were only two of us who’d be using this thing.  Finally, there’s this detail: I’m not a driver. Really. I don’t own a car. Oh, I have a license, and can find the pedals and turn the wheel, but I’m a subway and taxi guy. The prospect of driving a 12-passenger mini-van (which, I later found out from my brother-in-law, is the biggest, heaviest vehicle of this kind that Ford manufactures) did not fill my heart with glee. Neither did the fact that while I stood there in the Avis garage, staring at this thing, my wife couldn’t stop laughing. The laughter became downright hysterical several minutes later, when she discovered that the front seat was so high, I actually had to give her a boost to get her into the thing. She couldn’t manage it on her own. By the time I had started the van and found the heater, she was wiping tears from her eyes.

Those who were in the van — well, that would be just one other person, the laughing deacon’s wife, along with two irritatingly expensive bags-with-wheels that kept rolling around the huge, empty space — will attest that I spent a fair amount of my time on the Washington Beltway screaming. Every time we neared a bridge or an overpass, I could swear we were going to hit it, and I’d scream like a banshee: “Duck!!”

And the deacon’s wife, of course, thought this was a riot.

We survived our trip, and had a nice time.  We made it home in one piece.  We had one more terrifying moment when I had to drive under a low-hanging metal bar to return the van at the end of the trip.  Ignoring the honking Avis renters behind me, I made my wife get out and see if it would actually fit.  (It did, but barely.)

I’m not looking forward to a return trip at Christmas.  Traveling just isn’t as much fun as it used to be.

Unless, of course, you’re my wife. 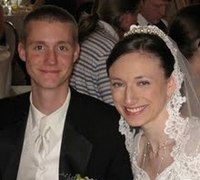