I think most of us could be forgiven for thinking that this reading from Mark’s gospel sounds like the preview for the new movie “2012.”

You may have seen it the ads: California slides into the ocean, waves come crashing over the Himalayas, and an aircraft carrier slams into the White House.

It is the end of the world as only Hollywood could imagine it.

But in Mark’s gospel, of course, and in our Christian teaching, there isn’t that kind of certainty. The only certainty is uncertainty. Anyone worried about 2012 should pay attention to this Sunday’s gospel.

“Of that day or hour, no one knows, neither the angels in heaven, nor the Son, but only the Father.”

We are called upon to be watchful, and vigilant. Look for signs. But know that the end could come at any time. Be prepared.

If it sounds familiar, it should. We encounter this message every year at this time, as the liturgical calendar draws to a close, and Advent approaches. November is a time for reflection – and it comes in a season of loss. We pray for the souls of the faithful departed. We lower the flag for Veterans Day. The harvest time is at hand. We see the leaves falling and the skies darkening and the temperature dropping. Our planet is moving further from the sun. We’re approaching the darkest moment of the year. 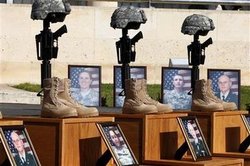 Two weeks ago, being prepared was on the mind of a 21-year-old soldier named Francheska Velez. She was nine weeks pregnant and was preparing to return home to Chicago in December. So Francheska went to the Soldier Readiness Processing Center at Fort Hood, Texas, to get her papers in order. And on any otherwise ordinary day during an uneventful autumn, that is where her life came to an end – and the life of her unborn child.

For so many of the Fort Hood victims, it was just another ordinary day.

There was Specialist Kham Xiong, 23. He was among the first killed as he waited to get a flu shot and a vision test. Days before, he had just arrived at Fort Hood with his wife and three young children and was getting ready to go to Afghanistan.

There was Lt. Eduardo Caraveo, who had arrived at Fort Hood the day before the shooting.

And there was the 55-year-old single mother, Juanita Warman, who had risen to the rank of lieutenant colonel and was preparing for another deployment to Iraq. Just before the attack, she’d left a message on her Facebook page. “So much to do.,” she wrote. “So many lives to touch … Just wish it didn’t take me away from home so much.”

None of them could imagine the day or the hour. This Sunday, they are all in our thoughts and in our prayers. We pray, as well, for their families and friends and those who loved them.

I wish I knew how to make sense of something so senseless. I don’t. I don’t think anyone does.

The gospel today reminds us: our time here is finite. Even the universe, which seems limitless, has its limits. One day, Jesus tells us, the stars will fall from the sky.

But the haunting passage from the book of Daniel offers this beautiful image: “The wise shall shine brightly like the splendor of the firmament, and those who lead the many to justice shall be like the stars forever.”

Consider the grim predictions of Mark’s gospel, and the prophecy in the book of Daniel.

And then let’s ask ourselves this simple question: what can we do when darkness descends?

We can cower in the shadows.
Or we can be sources of light.

This is a time of year when the world is desperate for illumination. We even create it for ourselves: soon, we’ll be stringing strands of light on street corners and around trees.

I think this is also a moment in our history when every heart is crying out for light. All you need to do is scan the headlines. From swine flu to unemployment to war…the forecast seems bleak. Cold. Dark.

Certainly, the scriptures this Sunday send out a message of warning. But it is also of hope. A message to pierce the darkness.

It’s worth asking ourselves: what are we doing to fight the darkness?

This is a time when each of us can, in our own way, give off light.

Enlivened by God’s grace, uplifted by Christ’s message of love and hope…we may even be able to shine like the stars.