The best “Mad Men” episode. Ever. 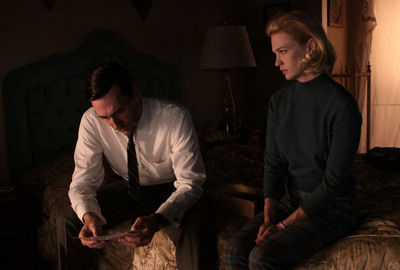 Betty seethed. Don cried. Roger resisted.
And Joan’s hapless husband Greg decided to join the army so he could be a surgeon. Would he have to go overseas? “Maybe West Germany, or maybe Vietnam, if that’s still going on,” he said, almost as an afterthought.

And then there was the final line: as the Drapers took their children trick-or-treating after Don’s life had unraveled and every complicated, self-deluding lie had been exposed. A neighbor recognized the children in costume as a hobo and a gypsy, then looked at Don, glowering under his fedora, and asked cheerfully, “And who are you?” Fade to black.  (Even the title of the episode, “The Gypsy and the Hobo,” seemed evocative of Don and Betty, didn’t it?)
Stay tuned. Television doesn’t get better than this.
If you missed it, there’s a video recap at this link.

read next post
Benedict, the Anglicans and Islam
archives most recent
More from Beliefnet and our partners
previous posts