Up in Boston, a man who once studied for the priesthood is now playing a priest onstage — and the Boston Globe’s Michael Paulson turns a spotlight on this intriguing melodrama: The weary priest, seated on a deep couch with a drink at hand, pauses for several minutes before responding to the question about how it felt to embrace a life of celibacy. When he answers, he begins with an anecdote, about the period of time just before he took his vows.

“One day, the fact of celibacy just – hit me in the face,’’ says Father Patrick Murphy, one of the central characters in a new play, “The Savannah Disputation,’’ which opens today at the Boston Center for the Arts.

“For the first time, I seemed to really – understand,’’ the priest says, “and I felt extremely free, like I had sidestepped a trap.’’

The character offers the comment as a straightforward confession of a long-buried emotion. But for the actor, Timothy Crowe, the line is rich with irony.

Crowe, 64, faced that same moment of understanding decades ago as a young seminarian in Missouri. But for Crowe, unlike for Father Murphy, sidestepping the trap meant not entering the priesthood.

“It was a very difficult decision,’’ Crowe said in an interview last week. “But I felt incomplete.’’

The character of Father Murphy is one of four deeply religious and chronically single people who populate “The Savannah Disputation,’’ a 100-minute comedy about two Roman Catholic sisters in their 60s who respond to a cheerfully anti-Catholic evangelical missionary who keeps knocking on their door by luring her into a debate over theology with their beloved parish priest.

Crowe’s character is a reluctant disputant, a position the actor relates to. “It makes me think of how unimportant all this bickering is,’’ he said.

In the play, that bickering, about the afterlife, the papacy, and the priesthood, is often quite raw. Much of the humor comes in the form of tart insults from Mary, the younger sister. At one point, she says of evangelical missionaries, “If you’re nice to them, they just keep coming back. They’re like cats.’’ The missionary’s pitch for Protestantism is so over-the-top that it, too, plays for laughs: “I didn’t know it, but every morning I was inviting this pagan, Satanic stuff into my house by doing yoga,’’ she says.

The Catholic environment of “The Savannah Disputation’’ is quite familiar to Crowe, who was an altar boy at St. Gabriel’s Parish in St. Louis, and who attended parochial school and Catholic high school before entering a St. Louis seminary as a high school sophomore. It was another era in the church, when Mass was in Latin and Cardinal Glennon College had 400 young men studying for the priesthood.

“This was the old days, when we studied Aquinas in Latin, had a monastic schedule and a very strict academic program,’’ Crowe said. “There were no newspapers, no radio, and no TV. There was silence during meals – we would be read to – and every night there was the ‘magnum silencium’ [the great silence] until after breakfast.’’

Crowe lasted six years before deciding the seminary wasn’t for him. “It came down to two words: authority and women,’’ Crowe said. “I had difficulty accepting rules that I thought were inane, and I felt very uncomfortable and incomplete being surrounded by all men all the time.’’

There’s more, including Crowe’s intriguing notion that the “church and the theater play in the same ballpark — meaning, destiny, relationships.” Check it out. 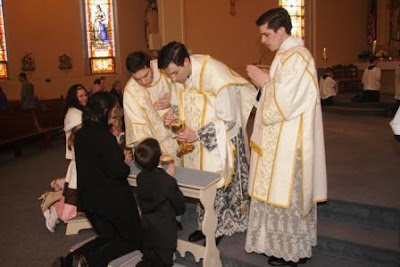 Society of Jesus Christ the Priest: divine or divisive?
archives most recent
More from Beliefnet and our partners
previous posts