“He was just a simple priest”: remembering the papal visit to Iowa in 1979

By Deacon Greg Kandra
Incredibly, it’s been almost exactly 30 years since Pope John Paul II made his historic trip to America’s heartland, celebrating mass at a farm in Iowa.  (“We are all farmers,” he said at one point.)
Well, the spirit of that visit, evidently, lives on in those who were there.

From the Des Moines Register: 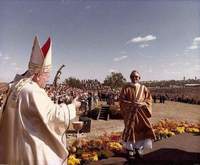 A pilgrim is one who embarks on a journey to find the sacred.

Pope John Paul II arrived in a helicopter called Angel One and the largest crowd in Iowa history — 340,000 pilgrims — waited for his sacred message.

Thirty years later, Oct. 4, 1979, is still recognized as one of Iowa’s most blessed and memorable days.

The memories are trivial: 9-year-old altar boy Bob Mulvihill’s eyeglasses slid down his nose, and he was too nervous to push them up as the leader of the world’s Catholics asked him if he was Irish.

They are significant: Iowa farmer Tom Frantzen was overcome by the pope’s message and altered his life’s work.

The pilgrims saw the pope as a gentle, humble man of God. He hugged children. His bright, blue eyes locked in on them. He was real.

“When I was a child, Catholics were seen as a far-out people who wore horns,” said Mary Jane Pray, 92, who sang in a choir that day. “I think it softened a lot of people’s hearts, especially if you were not Catholic. He was just a simple priest.”

His message was simple, too, but not easy: Care for the land and serve each other.

It’s exactly what some pilgrims did.

Check out the link for the rest of this long, enlightening and inspiring story.

Photo: Marvin Klein, a Dunlap farmer, served as deacon alongside the pope for the Mass at Living History Farms. He thought he would be afraid when reading the Gospel, but now recalls 30 years later, “It was amazing. I wasn’t.”  From the Des Moines Register file.
read next post
Unchained melody: a homily for the 26th Sunday in Ordinary Time
archives most recent
More from Beliefnet and our partners
previous posts