Bono and the pope: an encore? 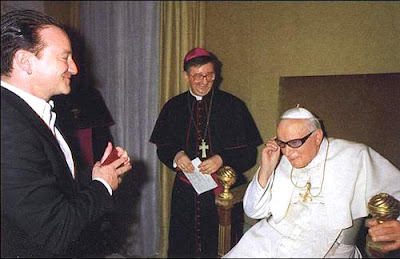 The celebrated rocker knows his way around the Vatican, and he’s no stranger to papal audiences (see the photo above.)

And a report indicates may meet with John Paul’s successor later this year:

Bono has been invited to meet with Pope Benedict XVI, along with more than 500 other artists and performers. This group will include members of the theater, art, literature and music communities and they will meet with the Pope at the Sistine Chapel on November 21.

The meeting is part of a concerted effort by the Roman Catholic Church to reestablish the relationship between the Church and art.

Archbishop Gianfranco Ravasi, president of the Pontifical Council for Culture, said in a news conference at the Vatican that the meeting is intended to build on the “special historical relationship between faith and art.”

According to the bostonpilot.com, along with the U2 frontman, other artists planning on attending include Italian film score composer Ennio Morricone, avant-garde theater director Bob Wilson, and architect Daniel Libeskind.

read next post
God bless us, everyone: Disney's new take on Dickens
archives most recent
More from Beliefnet and our partners
previous posts