In the middle of marking two feasts of the Blessed Mother — the Assumption and the Queenship of Mary — Zenit has published a report on one of the great unsolved mysteries of the Virgin: Juan Diego’s tilma. 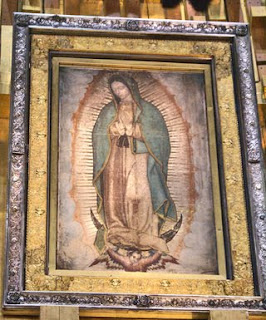 A physicist who has spent years researching the tilma bearing the image of Our Lady of Guadalupe is affirming that there is no scientific explanation for the phenomenon.

Adolfo Orozco stated this in a presentation given at an International Marian Congress that took place Aug. 6-8 in Phoenix.

The congress, sponsored by the Knights of Columbus, the Phoenix Diocese and the Institute of Guadalupan Studies, was dedicated to Our Lady of Guadalupe.

Orozco gave a presentation on the image of the Virgin imprinted on St. Juan Diego’s tilma, stating that it is “completely outside” any scientific explanation.

He explained that due to the humid, salty environment around the basilica where the tilma is kept in Mexico City, the cloak material should have decomposed years ago.

In fact, the researcher noted, this is what happened to a painted copy of the image that was made in 1789, on a material similar to the original tilma.

Although the copy was preserved behind glass, like the original, it had to be discarded eight years later because it was falling apart and the painting was fading, the physicist reported.

The original image, however, which was imprinted on the cloak when the Blessed Virgin appeared to the saint, remains intact after 478 years.

Orozco told his audience that this phenomenon is heightened by the fact that it should have been destroyed twice, once when nitric acid was accidentally spilled on a section of the cloth, and another time when a bomb exploded close to it.

He affirmed that there is no natural explanation for how the image has survived undamaged through time and potentially destructive events such as these.

You can find more at the Zenit link. H/T Googling God.

The savory pleasures of "Julie & Julia": cooperating in the act of creation
archives most recent
More from Beliefnet and our partners
previous posts